Advertisement
Ad
The Day After: Yes, you can blame the goalie 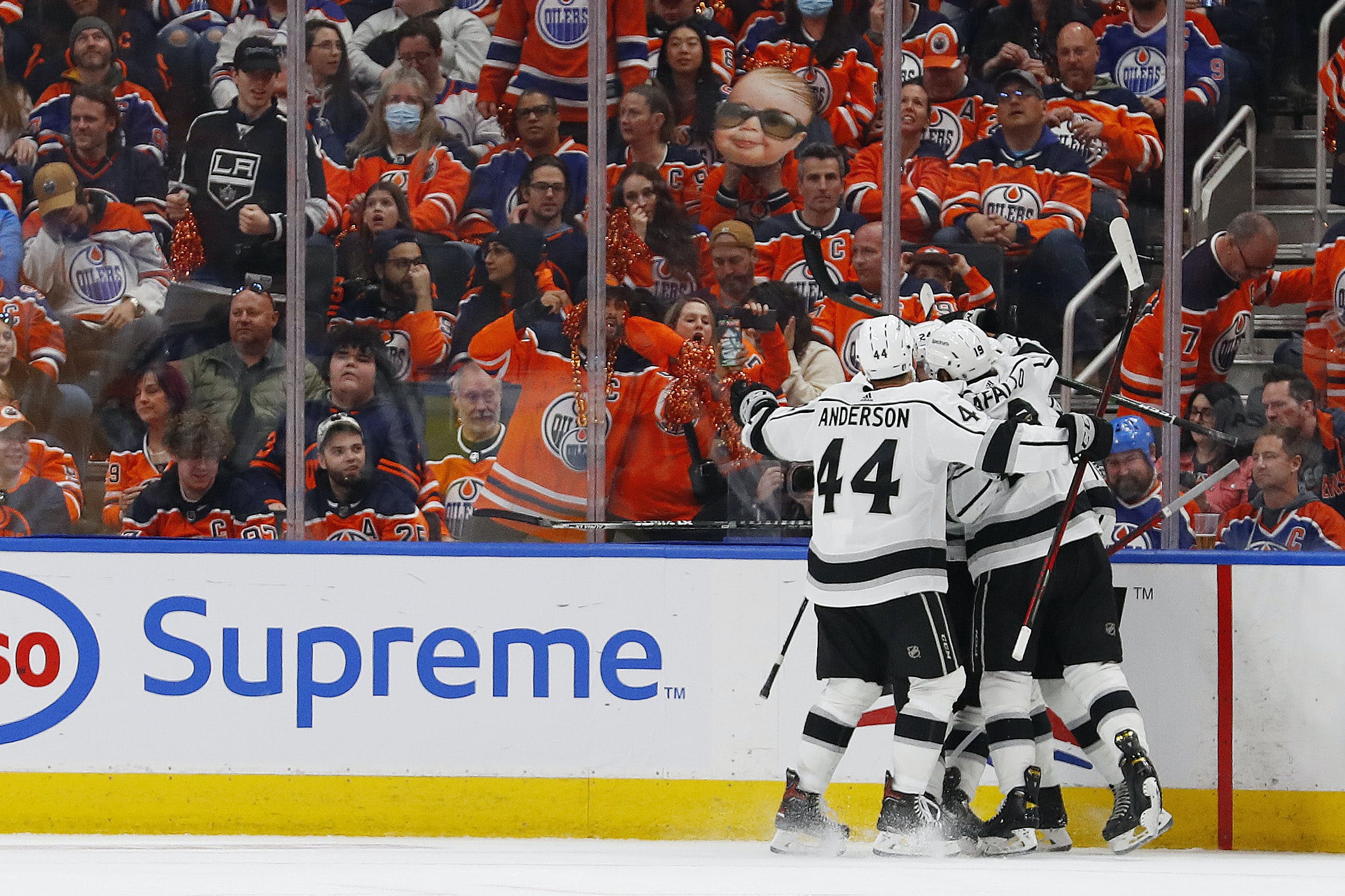 Photo credit: Perry Nelson-USA TODAY Sports
By Zach Laing
9 months ago
Comments
But the blame doesn’t just stop, or start with him.
It spreads around across the board after a Monday night that saw the Edmonton Oilers fall 4-3 in its first-round series opener to the LA Kings.
While the first period had all the tells of some playoff jitters for a playoff-inexperienced Oilers squad, it was their goaltender, a 40-year-old veteran in Mike Smith who made the critical mistake.
With just over five to play in the third with the score tied up at three, Smith went to play the puck and inexplicably decided to go up the ice instead to either of the defencemen to his left, or right.
It wasn’t the final dagger in what would be the subsequent goal against, but it was a glaring enough mistake that sent the five Oilers in front of him into a frenzy.
Advertisement
Ad
Advertisement
Ad
“I was just trying to make something happen,” said Smith of the blunder. “Obviously just trying to do too much there. In a tight game like that, you can’t afford to make mistakes like that.
“It ended up costing us the game and obviously disappointed. It’s one game. We move on and we worry about game two.”
Heading into that moment, however, there were more than a fair share of chances the Oilers had to close out the game, too. It’s easy to point the finger at Smith, how could it not be? He tried to go up the middle of the ice when he had two defencemen waiting on either flank to take the pass.
But as a whole, the Oilers played a rather solid game, all things considering. Despite going down 2-0 facing those aforementioned jitters, Edmonton fought and clawed back to tie the game up at three halfway through the second period. It just wasn’t enough.
Advertisement
Ad
Advertisement
Ad
“I didn’t love the way we started the game,” said head coach Jay Woodcroft after the game. “We gave up a chance off a neutral zone faceoff. We took an early penalty. Those type of things that allowed them to feel good at the start of the game.
“I thought we worked our way into things and found our way to compete and in the end, it came down to an error in the third period and they capitalized on it.”
For the Oilers, it was the usual suspects who took the game into their own hands. Connor McDavid was electric as ever with fans gasping every time he touched the puck. They were able to erupt when he scored the Oilers’ first goal of the postseason with 43 seconds left in the first frame.
Advertisement
Ad
Advertisement
Ad
Kailer Yamamoto’s dogged work ethic led him in front of the net 2:39 into the second, where he deflected home a shot to tie it at two.
And while Leon Draisaitl got one of his own partway through the second, things quieted down through the back half of the game. Both teams settled into their play and you could tell both were nervous to make a mistake.
Ultimately, Smith’s blunder cost the Oilers and if they have any hope of making it out of this round, let alone more for a run, he needs to be better. Smith was electric in April. 9-0, .951 save percentage, 1.66 GAA.
That Smith seemingly went by the wayside last night in favour of, well… a Mike Smith who struggled mightily through some of the earlier months of the season.
Advertisement
Ad
Advertisement
Ad
On top of it all, the Oilers themselves need to just take a big, deep breath. Game one is done and out of the way, and now they have some work to do to get back into it.
Onward…

Kings prevail over Oilers stars in Game 1 of Stanley Cup playoffs opening series
EDMONTON, Canada — The Kings’ reward for an completing a sometimes-tortured journey back to the Stanley Cup playoffs was a matchup they hope won’t turn out to be a punishment.
Finishing third in the Pacific Division put them up against the explosive Edmonton Oilers, whose top two centers have won the NHL scoring championship in five of the last six seasons. Connor McDavid recently won his second straight title and fourth overall by scoring a ridiculous 123 points; teammate Leon Draisaitl, the 2020 scoring champion, ranked fourth this season with 110 points.
“Arguably, we’re going against the best 1-2 punch,” Kings center Anze Kopitar said Monday before Danault appeared to tip a shot by Sean Durzi past goaltender Mike Smith with five minutes and 14 seconds left in the third period to give the Kings a 4-3 victory and overcome goals by Draisaitl and McDavid. The goal was initially credited to Durzi, though that might change after it’s reviewed.
“This was a big identity game,” Danault said. “We showed the character we got. We stuck with it.”
Kopitar and Phillip Danault are no slouches themselves when it comes to providing the strength up the middle that winning teams need. Either of them could have been labeled the Kings’ No. 1 center this season, especially with Danault producing a career-best 27 goals. “Most nights he was our best player, really,” Kopitar said.
Winning those matchups at center will go a long way toward determining the winner of this series.
Read more from the LA Times’ Helene Elliott here.

Do you think you know who will take home hockey’s ultimate prize? Do you think you can put together the ultimate playoff bracket? Sign up for a FREE ACCOUNT for the Daily Faceoff Playoff Bracket Challenge presented by PointsBet Canada to secure your spot for a chance at prices and glory! Sign up here.
Zach Laing is the Nation Network’s news director and senior columnist. He can be followed on Twitter at @zjlaing, or reached by email at [email protected]