Advertisement
Ad
The Day After: What are the Edmonton Oilers going to do with Mike Smith? 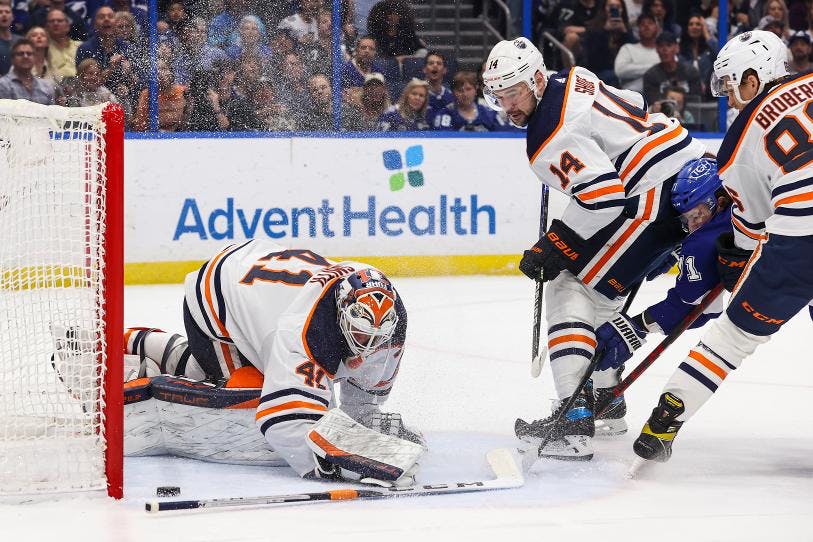 Photo credit: EdmontonOilers.com
By Zach Laing
11 months ago
Comments
The Edmonton Oilers are in a precarious position.
They’re tied for third in the Pacific Division, and they’re coming off one of their best games of the entire season — a 5-3 loss to the Tampa Bay Lightning.
If you look at the score, you’d think it wasn’t particularly close. But the game tells you a far different story.
Right off the opening faceoff when Connor McDavid, Leon Draisaitl and Zach Hyman lined up opposing the Lightning top line, they applied tons of pressure. That didn’t stop.
By the end of the night at 5×5, the Oilers controlled 62.5 percent of the shot attempts, 52.38 percent of the scoring chances, and 61.18 percent of the expected goal share. Impressive stuff against a team that ranks near the top of the league in all three categories.
Connor McDavid scored twice while Zach Hyman added another one, and the Oilers were close many more times.
Advertisement
Ad
Advertisement
Ad
But the problem? The problem was in the Oilers net. Mike Smith.
Edmonton limited the Tampa Bay Lightning to just five shots on goal in the first period, but two of them found the back of the net.
While Devin Shore inadvertently kicked it into his own net to open the scoring, Smith was slow to react and already out of position to do anything.
The second goal against? Inexcusable. Lazy. All around awful.
Smith was down in what’s called the RVH — short for reverse vertical horizontal, a position goaltenders go into when the play is behind their net. Smith, meanwhile, was holding this position well until the play got in front of him. The result?
Smith was down on his knees while Steven Stamkos ripped one top shelf on him.
Advertisement
Ad
Advertisement
Ad

I'm not sure I've ever seen a goalie in RVH for a shot from the faceoff dot like Smith just was for Stamkos goal. I didn't think the RVH no-fly zone could even extend that high in the defensive end

It’s truly inexcusable.
Tampa’s third goal came off a scramble in front of the crease where Brayden Point was able to push a puck through a sprawling Smith. Smith’s response? Well, according to the American feed of the game, Smith ripped into his defencemen at the bench during a timeout.

as pointed out on the american feed, mike smith was "giving an earful to a couple of his young defenceman" about their coverage in front on the brayden point goal. pic.twitter.com/bYxPzUj9k6

The fourth goal came off a scramble deep in the Oilers’ zone and the puck popped out to a wide-open Corey Perry, who ripped home his 400th NHL goal. A defensive breakdown, no doubt, but one where you need a save in a 3-1 game.
The Oilers should’ve won this game, full stop. They were the better team for 60 minutes controlling the pace of play all night. In what might be the most telling sign of this was how few shots the Oilers allowed: just 23.
Advertisement
Ad
Advertisement
Ad
It was tied for the fourth-fewest shots allowed in a game by the Oilers this season. The lowest was against the Seattle Kraken on Dec. 18th when Glen Gulutzan filled in for Dave Tippett, who was out with COVID-19, with just 17 shots against.
The other two fewest? Feb. 14th against the San Jose Sharks when the Oilers allowed 20, and Feb. 20th against the Minnesota Wild, when the Oilers allowed just 22.
Smith was in net for both the Wild game and the game last night against the Lightning and somehow, Smith walks out of those two games allowing eight goals against on 29 shots — good enough for a .750 save percentage.
If the Oilers even get league average goaltending, something closer to .900, we’re talking about two big wins against two tough teams.
Advertisement
Ad
Advertisement
Ad
What’s clear is this: Edmonton has a tough decision to make ahead of them. I don’t know how anyone in the organization can feel confident going back to Mike Smith and his dismal .887 save percentage.
He’s no longer someone you can trust. He’s costing the Oilers games, no matter how hard he battles.
There’s no denying the best goaltender in the organization isn’t even on the Oilers roster. Stuart Skinner has been lighting up the American Hockey League once again this year, and in his NHL action, he’s posted the best numbers of any goaltender.
Koskinen hasn’t been great by any means for the Oilers this year, but he’s been better than Smith and has kept Edmonton in games, despite some early faults.
It’s a tough decision off the ice to do something like placing Mike Smith on waivers, but on the ice, the Oilers need Stuart Skinner at the NHL level. Otherwise, this season could slip between their grasp.
Advertisement
Ad
Advertisement
Ad

Lightning’s Corey Perry nets career goal No. 400 in win over Oilers
TAMPA — Lightning forward Corey Perry knows how to sniff out a crease like a shark. He’s quiet, he’s slick, and he sneaks up on the best of them.
Facing an Edmonton team that had played eight games in February — winning five straight — to the Lightning’s three, Tampa Bay knew it wasn’t going to be an easy night Wednesday. But Perry’s skill was brought to the forefront in a special way in the Lightning’s 5-3 win at Amalie Arena.
With less than five minutes to play in the second period and the Lightning (33-11-6) on a power play with a 3-1 lead, attention was on the puck as it went into the corner. Perry stayed to the outside of the crowd in arm’s length of the goal. When the other players finally fished out the puck, it landed on the stick of Lightning defenseman Mikhail Sergachev, prompting him to take a one-timer toward goalie Mike Smith.
As the puck moved toward the net, Perry stepped into the crease, deflected it off his stick and put it top shelf past Smith for what was eventually the winning goal. Just as important, it was career goal No. 400 for Perry.
“It’s a great personal accomplishment,” said Perry, 36 and in his 17th season. “But I have to give a lot of credit to the guys I’ve played with in the past, the guys here. It’s exciting. I never thought growing up that I’d hit 400 goals in the NHL, but I’m pretty excited and happy right now.”
Read more from the Tampa Bay Times’ Mari Faiello here.