Advertisement
Ad
The Stages of Becoming an Oilers fan 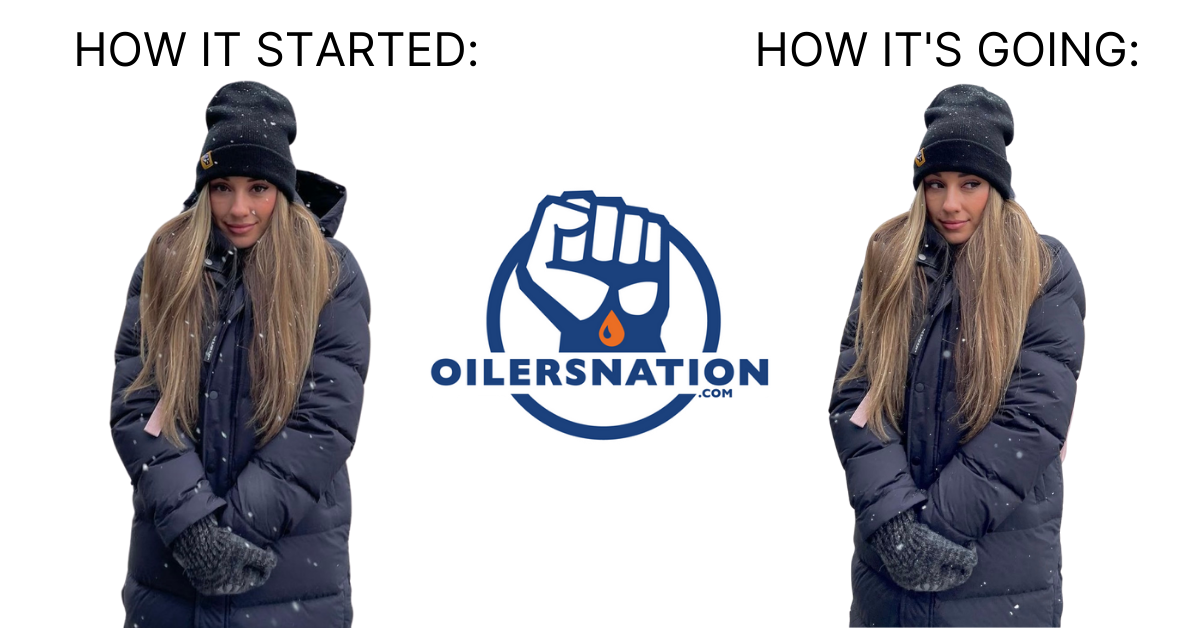 By Caroline Szwed
10 months ago
Comments
Okay Oilersnation! So since we’re only getting one hockey game per week these days, I’ve had a lot of time to reflect and think about the last several months.
As you all know, I came to Edmonton as a Toronto Maple Leafs fan and the story goes that my fiance (Physio Mike) brainwashed me into becoming an Oilers fan. I cannot confirm or deny this.
Anyways, I spent some time going through my Twitter feed from a few months ago and I thought to myself, “I should make a timeline of what my experience has been like,” and boom, here we are!
Welcome to the stages I went through to become an Oilers fan.

Stage 1: Calm before the storm:

The excitement and anticipation sets in. This is a new adventure!

It’s Game Day! I’m excited to be here in Edmonton but the Toronto girl is creeping back in just a little.

PICK YOUR PLAYER: 1 or 2 pic.twitter.com/19ilJoPgU7

As someone who spent her whole life cheering for the Leafs, I have a lot of healing to do. This was a perfect example of my gut trying to tell me something I already knew.

Oilers fans … what is happening ?

As someone who’s watched the Leafs for years, I thought 3rd period collapses were just a Toronto thing!! 😵‍💫

Hey, it’s easy to ignore your gut when you have something like the BoA to look forward to! Watching my first BoA as a new Edmontonian was a seriously cool experience and made me forget about all my worries. (Thanks Kassian!)
Advertisement
Ad
Advertisement
Ad

Use 1 GIF only to describe the Battle of Alberta:

Okay, so now we’re at the point where the team started to do SO well that I thought I was witnessing something much bigger than hockey happen here in Edmonton.

I fell in love with the city, the community, the fans and the team so much, that I began to move forward without hesitation.

But why does it feel almost wrong cheering for the Leafs now?

Hey @OilersNation what have you done ?! 😂

This whole, “becoming an Oilers fan” experience made me realize that Edmonton is home. It may be really cold here but this is where I’m supposed to be.
Advertisement
Ad
Advertisement
Ad

Stage 8: Acceptance into the Donair community

A true honour and a privilege. But the true question is, with lettuce or without?

I am so invested, excited and amped that getting a Stuart Skinner tattoo on my forehead may have crossed my mind during this crazy game against the Jets.

I had heard of these slow starts in Edmonton but I chose to believe it would be different this season. As a rookie fan, I thought that the start to the season was so incredible … there’s no way that it could go sideways. At this point, I remember thinking, “how bad could it get?”
Advertisement
Ad
Advertisement
Ad

Yooooo these Oilers starts are killing me slowly

…that losing back-to-back games to the two worst teams in the Metropolitan division is definitely possible! Also, just because one really bad losing streak was snapped, doesn’t mean it won’t happen again.

6 shots on net in the 1st against the worst team in the Metro division playing with the two best players in the world pic.twitter.com/VCgpQiA1kg

But despite the pain, I still have faith because I’m in the best company with the realest fans in the league!

Sitting here telling Mike how much I love you Oilers fans because y’all are enjoying a broadcast team that’s chirping your team bc “they’re speaking facts” … respect! 😂

All jokes aside, this has been the most entertaining rollercoaster ride I’ve been on and I wouldn’t go back if I could! I always will have a soft spot in my heart for the Maple Leafs but I’m here in Edmonton now for better or for worse. Thank you to everyone who has accepted me with open arms and for showing me the way. The reason I fell hard for this city and this team is because of the community and the people! You all rock!
Advertisement
Ad
Advertisement
Ad
Now, I leave this article on Stage 12: More Pain because we’re currently in it (send prayers). However, I hope that there is some kind of light at the end of the tunnel. For those who have been life long Oilers fans, please let me know what stage I should be prepared for next (haha).
To Be Continued!