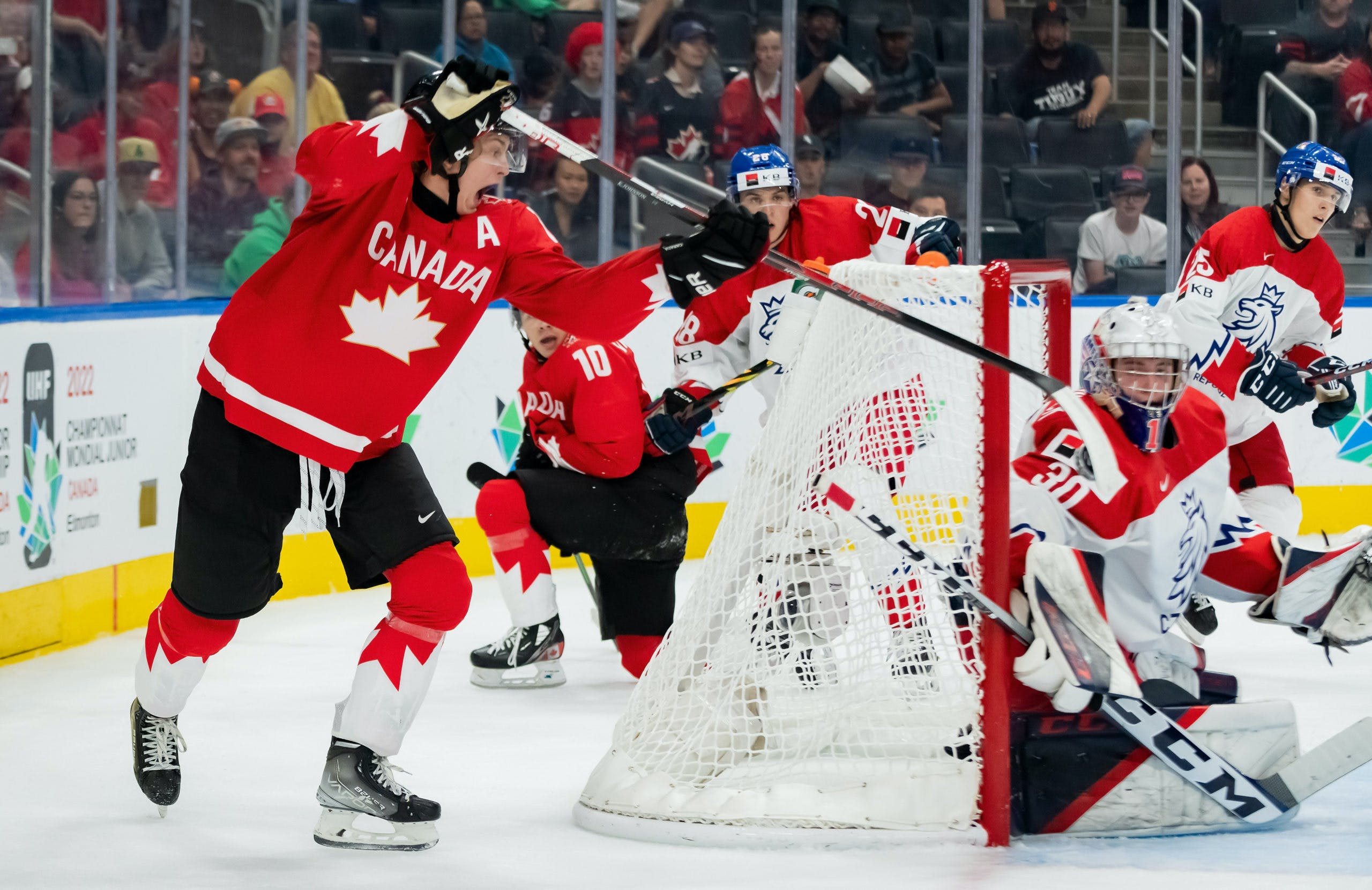 Photo credit: twitter.com/hockeycanada
By Zach Laing
5 months ago
Comments
Take a bow, Kent Johnson.
All tournament long he’s been buzzing around opposing nets, but until the end of the first frame of Canada’s Saturday night 5-1 win over Czechia, he couldn’t find the back of the net.
But out on the ice with a minute to go, Johnson found himself behind the Czechia net with a bouncing pick in his skates. Dangling in a phonebooth, Johnson swiftly lifted the puck on his stick tucking it into the top corner of the net.
That’s one way to get the proverbial monkey off your back.
Johnson’s goal opened up the flood gates for what had been an otherwise frustrating first frame for the Canadians. Four and a half minutes into the first period, Brennan Othmann got boarded send the Canadians off to a five-minute powerplay.
Just 36 seconds into it, however, Slovakia’s Martin Rysavy — who plays for the WHL’s Moose Jaw Warriors — streaked down the ice on a partial breakaway tinging the left post as the puck deflected into the top of the net and back out. Blink and you miss it, just like all the referees did as play continued on. A quick review would right the wrong, and Slovakia had an early lead.
Advertisement
Ad
Advertisement
Ad
The Canadians couldn’t quite find their legs on that powerplay, but it wasn’t exactly their fault. From left, right and center, the Canadians outshot Czechia 23-8. Credit where it’s due, as Tomas Suchanek stood on his head.
Mason McTavish, however, got the show started minutes before Johnson’s goal, as he banked a Jack Thompson point shot into the net off his leg. Come the second, the flood gates opened. Ridly Greig scored on a well-deflected shot, while Mason McTavish scored another highlight-reel goal. Shocker, am I right?
By the end of it, Canada walked out with a 5-1 win in thanks to a third-period marker from Tyson Foerster.
The home country team will get their first true test of the tournament on Monday night as they take on Finland to close out the round-robin stage of the World Juniors. Finland took out Latvia 6-1 on the opening day of the tournament, then narrowly beat Czechia snagging a 4-3 win in the shootout. They’ll take on Slovakia Sunday afternoon.
Advertisement
Ad
Advertisement
Ad

dirty hit here from jaroslav chmelar on brennan othmann. canada's off to a five-minute powerplay as chmelar gets called for a boarding and is given a game misconduct. pic.twitter.com/9JMdpQwptS

czechia goaltender tomas suchanek is in a state of flow tonight as he stops the 15th shot he's faced so far. pic.twitter.com/qZQIFi281T

canada finally breaks through suchanek as jack thompson banks one in off mason mctavish. 1-1 tie. pic.twitter.com/9jfLfLQGQP

ridly greig has his second of the tournament and it's a 3-1 game. pic.twitter.com/x0N3BfcMqF

this blast from tyson foerster gives canada a 5-1 lead in the third period. pic.twitter.com/JhAH5CGYZL