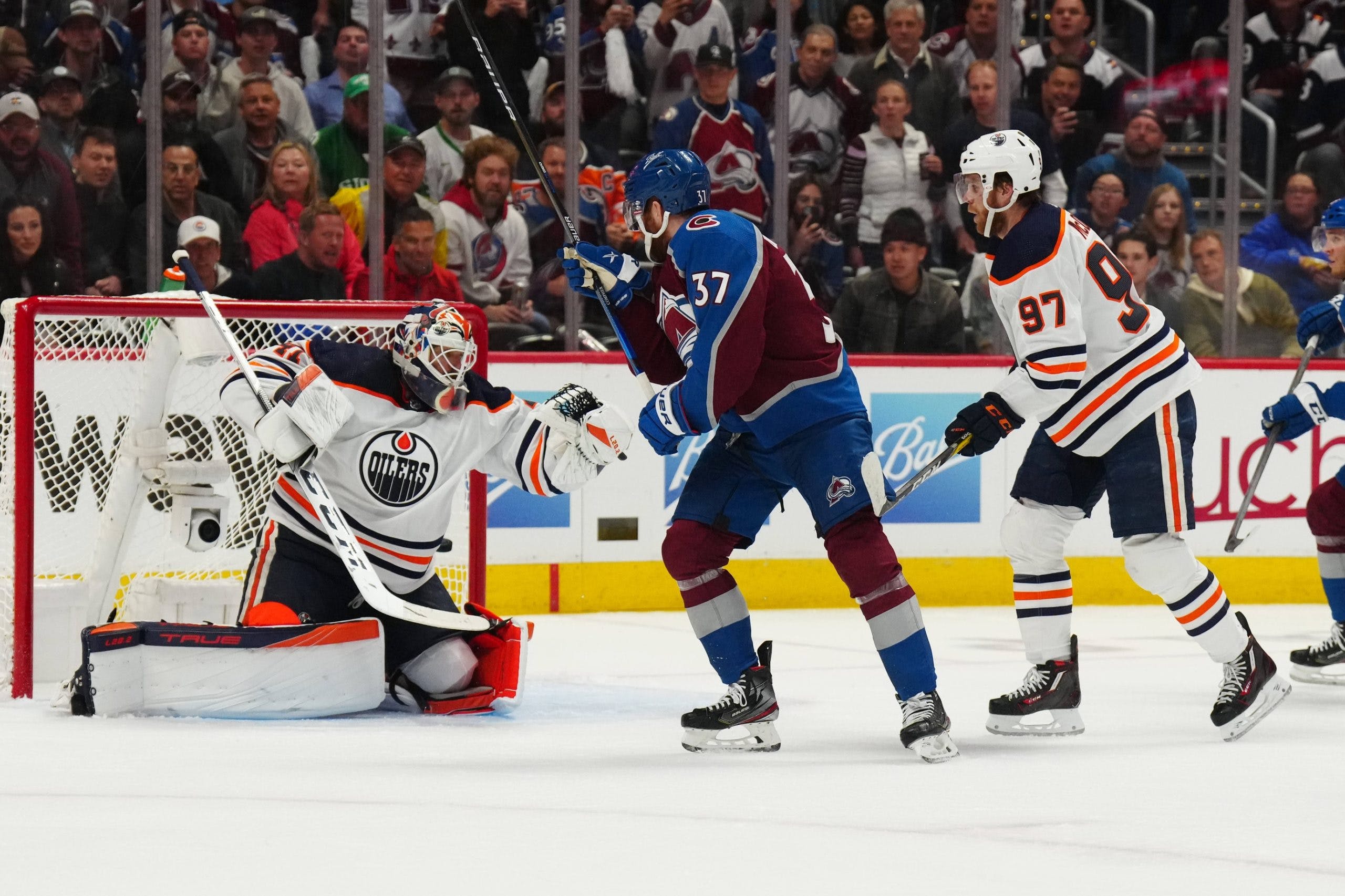 By Jason Gregor
5 months ago
The perfect summary of game one of the Western Conference Final comes from the words of the wise Ron Burgandy: “Boy, that escalated quickly. I mean, that really got out of hand fast.”
If you haven’t seen the 2004 film Anchorman: The Legend of Ron Burgandy, that infamous quote is when he references a brawl he and his coworkers had with a rival news station earlier in the film. What makes the scene so funny is how nonchalantly he says it, like it was no big deal.
It depicts game one perfectly.
You saw an NHL record for most goals, 14, in game one of the Western Conference Final.
Both starting goalies left the game. Mike Smith was pulled after allowing six goals and @Darcy Kuemper left with an upper body injury.
@Cale Makar and @Connor McDavid each had three points.
@Nathan MacKinnon, @Leon Draisaitl, @Mikko Rantanen, @Evander Kane, @Gabriel Landeskog and @Ryan Nugent-Hopkins each had two points.
Each team got a goal for its fourth line.
Colorado got two goals from its third line while the Oilers got one.
And there was a video review that, by the rulebook, was correct, but definitely had people debating what is deemed control of the puck.
I understand why it was deemed a good goal, due to the tag up rule. Makar didn’t touch the puck (in the offensive zone) until Valeri Nichushkin was out, so it’s the exact definition of tag up. However, they grey area is whether Makar had possession of the puck. After the game Makar said he was waiting for Nichushkin to clear the zone. If he did that in real time, that is amazing on-ice awareness, but he didn’t lift his stick like I’ve seen others do when waiting. However, intent doesn’t come into it. By rule he wasn’t touching the puck. We can debate if that is possession or not, but the current wording shows it was a good goal.
Former NHL referee Dave Jackson, a good follow on Twitter at @ESPNRefNHL, explained it quite well.
“So picture a delayed offside. Makar dumps the puck into zone, stays onside, and doesn’t touch the puck again until his teammate tags up. Onside, possession is not a factor on this play.”
Then Jackson was asked how Makar looked like he was stickhandling the puck, thus in control.
“The application is the same. Pretend he was standing still and bumped it over the line by inches and just waited for the tag up.”
If Makar was that aware in real time, that is amazing, and we should be talking about how incredibly aware that was, not to mention the ridiculous, perfectly-placed shot to score.
The Oilers got a close call go their way in game five v. Calgary when Blake Coleman’s goal was called back. And last night it went Colorado’s way. What stung the Oilers was on the ensuing power play (Edmonton was assessed a delay of game penalty for challenging the call and not having it overturned) the Avalanche scored.
Tough sequence, no doubt, but that wasn’t the big issue for me.

NEED TO FOCUS AFTER SCORING… 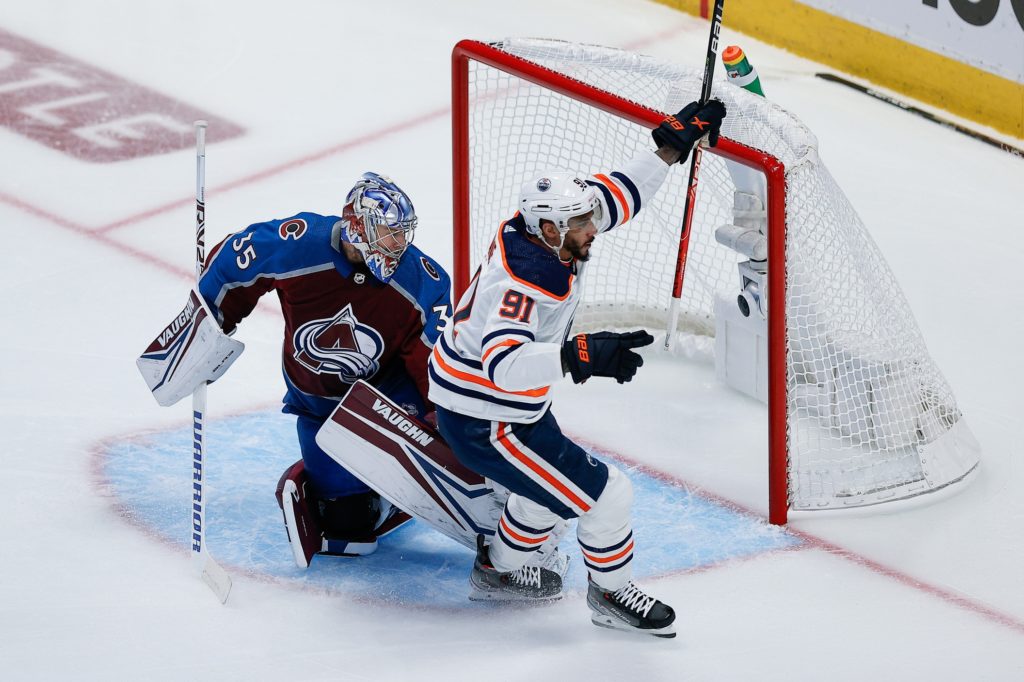 May 31, 2022; Denver, Colorado, USA; Edmonton Oilers left wing Evander Kane (91) scores a goal against Colorado Avalanche goaltender Darcy Kuemper (35) in the first period in game one of the Western Conference Final of the 2022 Stanley Cup Playoffs at Ball Arena. Mandatory Credit: Isaiah J. Downing-USA TODAY Sports
The concern for the Oilers is that on three separate occasions when they scored a goal, they then allowed a goal right away.
Kane gave the Oilers a 1-0 lead, but Compher tied it 36 seconds later.
Zach Hyman tied the game 2-2 at 19:37 of the first. But the Oilers allowed Makar to tie it NINE seconds later.
Ryan McLeod tied the game 3-3 early in the second period, yet, once again, the Avalanche scored 99 seconds later.
The concerning part for Edmonton is this is a trend that has occurred too often this post-season.
In game five in Calgary, Hyman made it 3-2 at 14:57 of the second period. Then Johnny Gaudreau scored 15 seconds later and Calle Jarnkrok scored 16 seconds after Gaudreau. Edmonton allowed two goals 31 seconds after scoring.
In game one in Calgary, Evan Bouchard scored at 7:10 of the second to pull the Oilers within three goals, but Matthew Tkachuk scored 74 second later to regain the four-goal lead. Early in the third period Kailer Yamamoto tied the game at six, but Rasmus Anderson scored 91 seconds later to regain the lead.
In game three of round one v. LA, Anze Kopitar scored 16 seconds after Kane had scored. Kane had given Edmonton a 5-0 lead midway through the second period, and were in complete control of the game, but the Oilers relaxed after scoring a goal.
In game one v. the Kings, Yamamoto tied the game 2-2 early in the second period, but Brendan Lemieux restored the lead 71 seconds later.
After the game-five clinching series win over Calgary, Leon Draisaitl addressed the need to lock things down after scoring. “When we do tie it up, or we do go ahead, we need to settle the game down a little more and not go back-to-back shifts with getting scored on,” said Draisaitl. “It’s something we can adjust. Those are, again, things we can learn.”
The need to learn quickly.
While the Oilers have shown a trend of allowing goals right after scoring, they’ve also shown an ability to not give up. They’ve overcome four, three and two-goal deficits on multiple occasions. They have won both series after losing game one. Those are positives but also aren’t a guarantee to repeat themselves against Colorado.
The Oilers will be better defensively, but they need to stay focused after scoring goals. They can’t let up and allow the Avalanche to regain momentum in the next 100 seconds. That trend needs to stop.