For better or worse, this is now Ken Holland’s team 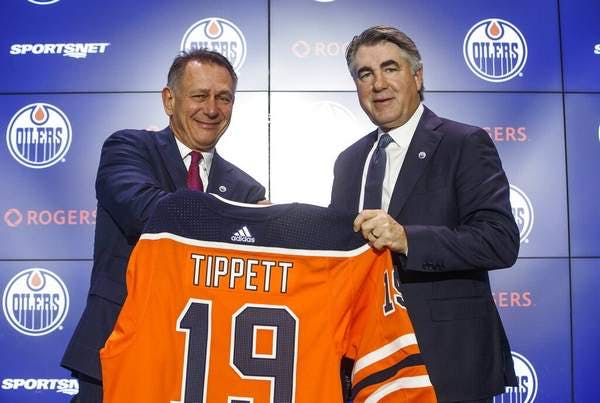 By Zach Laing
1 year ago
When we see general managers take over organizations, it usually takes a bit for them to make their mark on the club. They’re often left with a mess to clean up. Bad contracts, lack of prospects, and a team typically further away from winning than not.
In Ken Holland’s case, he had his work cut out for him.
In 2018-19, the season before he joined the club, the Oilers were a near laughing stock. They were the second-worst team in the Pacific Division and had a -52 goal differential in all situations with two of the best players in the league on the team
Holland inherited a roster full of holes and it didn’t take long for him to get to work. He flipped Milan Lucic and a pick for James Neal. At his first draft, he brought in Philip Broberg, Raphael Lavoie, and Ilya Konovalov, three players who are close to playing NHL minutes.
He bought out Andrej Sekera and signed a bunch of players: Gaetan Haas, Markus Granlund, Alex Chiasson, Tomas Jurco, Jujhar Khaira, Mike Smith, Josh Archibald, and Riley Sheahan all joined the team, along with the aforementioned Neal.
Most notably, he made a coaching change and bought in Dave Tippett. The Oilers instantly appeared better and right up to the pandemic pause were in a tight race for the Pacific Division title — a massive turnaround from the year prior.
Holland extended Zack Kassian to a four-year, $3.2-million AAV deal he’d probably like a mulligan on while bridging Darnell Nurse, a lane the GM will need to cross again soon in the midst of the season.
Only a few weeks away from the shutdown, Holland pushed his chips to the middle of the table trying to make the team deeper: he acquired Tyler Ennis, Mike Green, and Andreas Athanasiou. The first of the three is the only one that paid out as Green got hurt then retired, while Athanasiou struggled with a quad injury and was never really 100% before walking into free agency due to a qualifying offer too rich for the Oilers’ blood.
The pandemic brought with it a shutdown and the announcement of a cap that would stay flat for the next three to four years. It led to the Oilers not being able to qualify Athanasiou, a move the team otherwise would’ve made as the cap was expected to climb to $84-$88-million.
When things got back underway, the Oilers got eliminated by Chicago in a play-in round.
In draft two he brought in Dylan Holloway, Carter Savoie, and Tyler Tullio, three promising prospects, while also dipping his toes into free agency. Kyle Turris, Tyson Barrie, Mike Smith, Tyler Ennis, Domink Kahun and Slater Koekkoek all were extended or brought in while Dmitry Kulikov was his one-trade deadline move.
Holland never had much ammo to work with, so the moves were finite.
But over the last week, Holland found himself with a stockpile of ammo in the form of cap space and he didn’t shy away from using it.
*deep breath*
Ryan Nugent-Hopkins extended, Mike Smith extended, Tyson Barrie extended, Tyson Barrie extended, Kailer Yamamoto extension discussions, Caleb Jones traded, Duncan Keith acquired, Xavier Bourgault drafted, Luca Münzenberger drafted, Jake Chiasson drafted, James Neal bought out, Zach Hyman signed, Cody Ceci signed, Derek Ryan signed, Ethan Bear traded, Warren Foegele acquired, and now, Darnell Nurse extension discussions.
*exhales*
So yeah, one hell of a lot of things have happened in a short time. This was the first offseason that Holland really had his chance to make his mark and boy, did he ever.
Holland is now married to this team and will live or die with them.
Now, the team has to deliver. Holland and co. clearly have a mindset that the Oilers are either in, or are entering their championship window, and this plethora of moves this offseason needs to push the Oilers closer to it. They need to make some noise and at the very least, they need to win some playoff rounds.
Will Holland’s moves push them closer to a cup or will they stall out again?
For better or worse, this is now Ken Holland’s team.
Zach Laing is the Nation Network’s news director and senior columnist. He can be followed on Twitter at @zjlaing, or reached by email at zach@oilersnation.com.
Nation Takes
News
Oilers Talk
Recent articles from Zach Laing