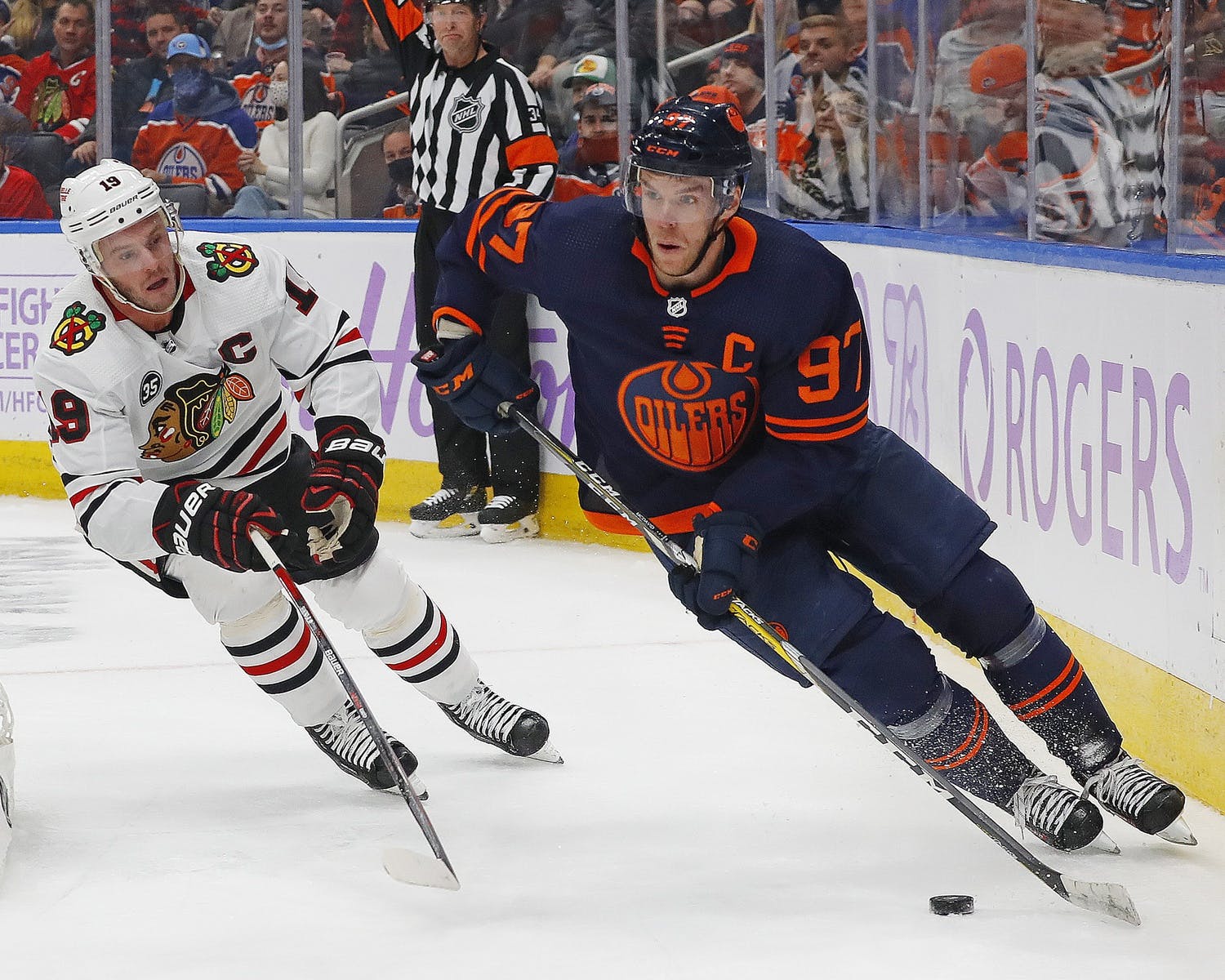 By Jason Gregor
8 months ago
@Mikko Koskinen will make his 150th appearance as a member of the Edmonton Oilers tonight in Chicago. It will be his 139th start with the Oilers and he’s looking to continue his recent hot streak. He is 7-0-1 in eight starts since January 22nd with a sparkling .934Sv% and 2.20 GAA.
Koskinen went 8-1 in his first nine starts this season, but he had a .912Sv% and 2.77 GAA. Individually he has played better during his past eight starts, and was the main reason the Oilers defeated Calgary and Florida.
Koskinen was 4-0-1 in his last five games with Dave Tippett and he is 3-0 with Jay Woodcroft. He has played well under two different coaches and two different systems. The challenge now will be: Can he maintain it? I don’t expect him to post a .934Sv% over his next eight starts, but the biggest change I’ve seen in his play recently is how he has eliminated the “weak” goals. For the past three seasons, that was his downfall more than anything else. He’d allow a weak goal early in a game, or after making a few outstanding saves, he’d let a wrist shot from distance sneak by.
We haven’t seen those types of goal recently, and if that continues Koskinen has shown he can be a competent and reliable goalie.
I liked his honesty in his post-game interview after his first shutout of the season in Philadelphia. “We kept them to the outside, and they kept shooting from everywhere which is what a goalie likes,” he said. He complimented his teammates while taking a subtle little jab at the Flyers. He was accurate on both accounts, and that doesn’t overlook that Koskinen made the key stops when needed. He was poised and controlled throughout the game. I re-watched the game this morning, and I didn’t find one sequence where he was scrambling or out of position. He was very good and clearly is playing with a lot of confidence.
He deserves the start tonight, and if his strong play continues I’m curious how Woodcroft manages his goalies. Historically, Koskinen plays better when he isn’t overplayed. So does @Mike Smith play Saturday against Montreal, but then Woodcroft goes back to Koskinen in an important game v. Calgary? What if Smith plays well on Saturday — does he get two starts? Will we see Woodcroft give each goalie two starts, like Tippett did in 2019-20?
A few weeks ago @Stuart Skinner seemed like the best option for the Oilers, but now it is Koskinen. The only question will be: How often do you play him and how long will he play this well? If Smith has a solid performance against Montreal then Woodcroft has a good problem on his hands. You’d much rather have to decide between two goalies playing well, than risk overplaying Koskinen.
Tonight is Koskinen’s first career start in Chicago. He did make a relief appearance two years ago on March 5th, 2020, and he stopped all 10 shots he faced in 25 minutes of play. He’s been great on the road this season going 12-2-2 with a .919Sv% and 2.59 GAA, and he, like all this teammates, will want to get Duncan Keith a win in Chicago. Keith will likely put up a large sum of money on the board (money that goes to the team fund if they win), so there should be no lack of excitement from the group.
It is too early to say Koskinen has cured the Oilers goaltending woes. He had a .899Sv% on the season prior to his last two wins, but he has played well since January 22nd and if his solid play continues the angst and concern Oilersnation had regarding the play of the goaltender on a given night will subside.

Foegele – McDavid – Hyman
Kane – Draisaitl – Yamamoto
Benson – McLeod – Ryan
Shore- Malone
Nurse – Barrie
Keith – Ceci
Niemelainen – Bouchard
Lagesson
Koskinen
It is expected Woodcroft will stick with the same lineup that won 3-0 in Philadelphia. Tyler Benson missed practice yesterday, with a non-COVID illness, but he was on the ice this morning and is expected to play. Cody Ceci will play his 600th game tonight. He’s been a solid acquisition and has played well all season. His best attribute has been his consistency. He isn’t flashy, but he hasn’t had many weak performances.

Kubalik – Strome  – Kane
DeBrincat – Toews – Johnson
Hagel – Dach – Entwistle
Kurashev – Carpenter – Lafferty
De Haan – S. Jones
C. Jones – Murphy
Stillman – McCabe
Fleury
The Hawks should be an excited bunch tonight as Jonathan Toews, Tyler Johnson, Calvin de Haan and Riley Stillman all return to the lineup. It will be Johnson’s first game since October 29th. Stillman missed the past 14 games, Toews missed 11 and De Haan was out two games. The Hawks forward group is suddenly much deeper, and De Haan solidifies their top D pairing.
This is another very winnable game for Edmonton. If they continue to play sound defensively this should be another win. 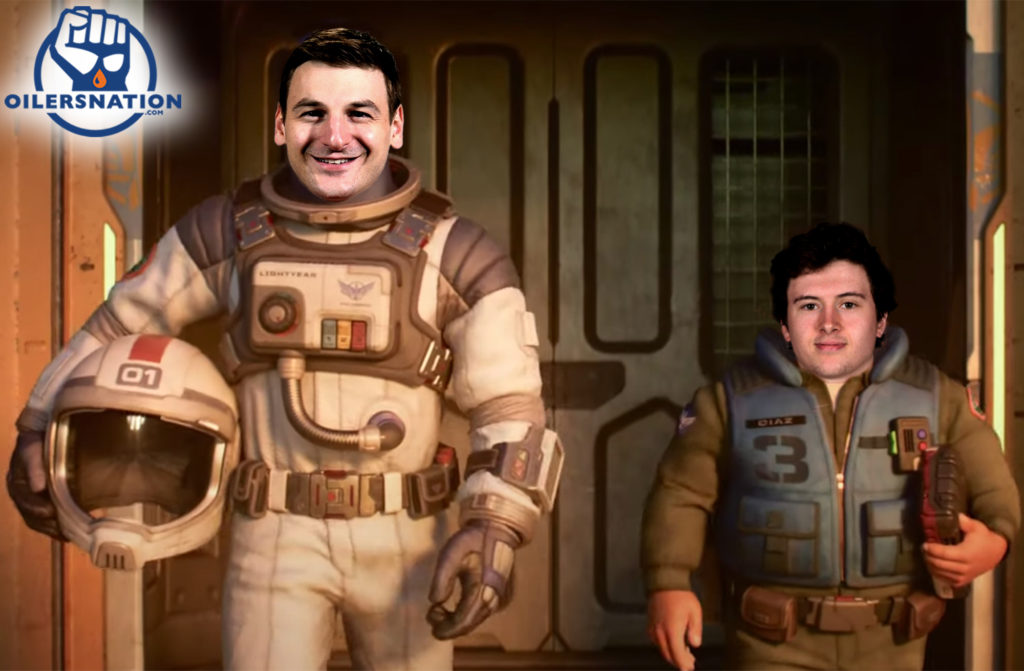