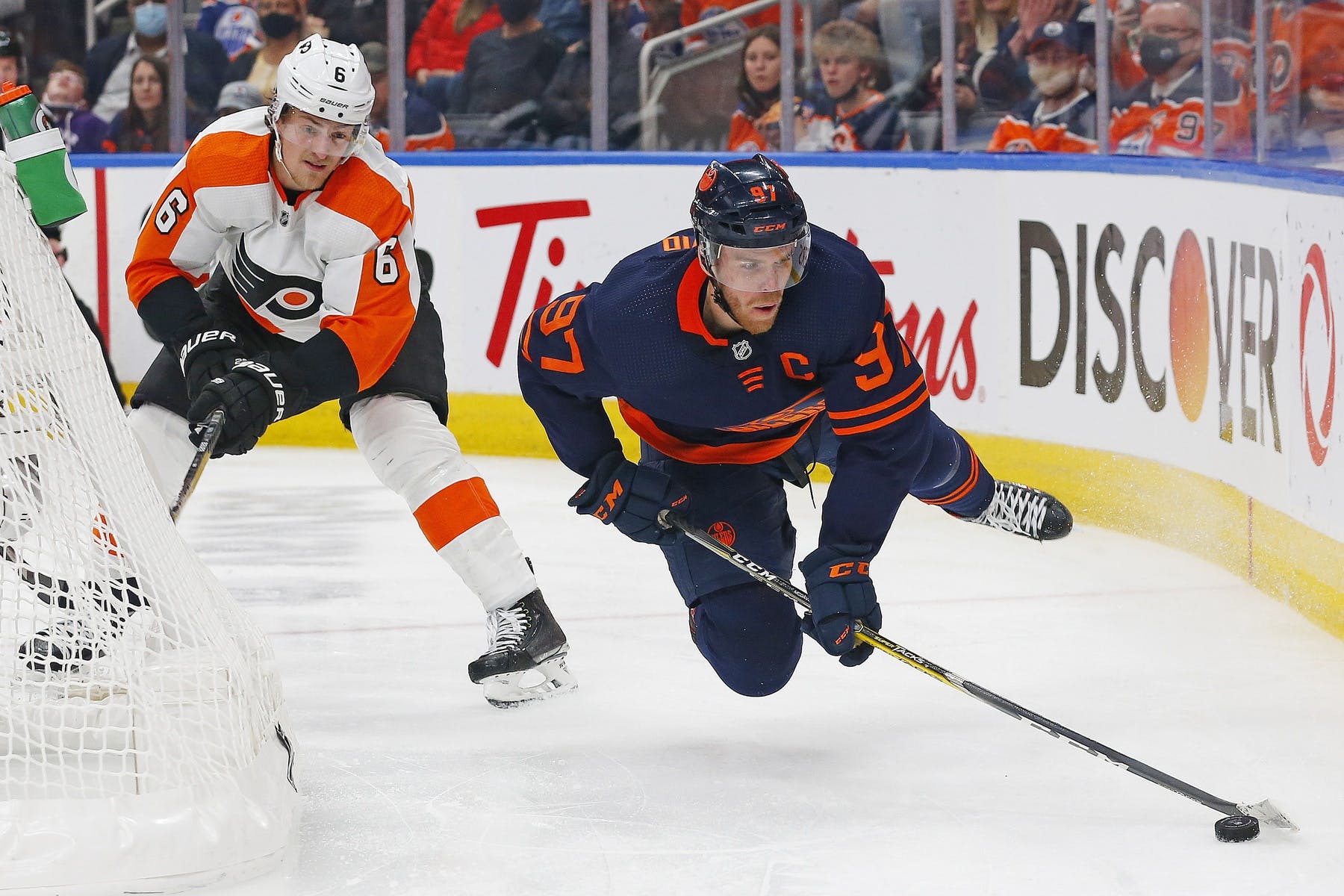 Photo credit: Perry Nelson-USA TODAY Sports
By Jason Gregor
9 months ago
Comments
It might be the new relationship euphoria, where everyone is on their best behaviour and excited to impress their new partner, but as Jay Woodcroft is poised to coach his 10th NHL game the Oilers have made immense improvements at 5×5.
If it has staying power, Edmonson is suddenly a team that could have sustained playoff success.
Let me preface this by saying I realize nine games is a small sample size, but the Oilers play at 5×5 didn’t flounder against Tampa Bay, Florida or Carolina. Those are three of the top teams in the NHL and Edmonton outscored them 6-5 at 5×5 despite missing three or four (depending on the game) of the their top-11 skaters in TOI/game.
Edmonton has shown signs of legitimacy recently.
The Oilers are 6-3 with Woodcroft.
They are 10th in goals for/game at 3.67.
They are 12th in goals against/game at 2.78.
Their PP is 10th at 21.4%.
The PK is 25th at 75%.
They are 11th in shots for/game at 33.6.
They are 7th in shots against/game allowing 29.4.
Advertisement
Ad
Advertisement
Ad
They need to tighten up their penalty kill, but the biggest improvement has come in their 5×5 goals for and against. They’ve outscored teams 23-14.
They are averaging 2.55 GF/game and only allowing 1.55 GA/game.
The Oilers are sixth best in GA/game at 5×5 trailing only Boston (1.1), Dallas and Carolina (1.38), Tampa Bay (1.4) and the New York Rangers (1.50).
In 2017 the Oilers were ninth in GA/game at 1.70. Since then it has been a massive struggle limiting goals, but so far under Woodcroft they players have accepted the challenge to improve their neutral zone play, and he’s incorporated a system that is giving them success. The new found success can become intoxicating for players. They yearn for it and are driven to maintain it.
They’ve embraced Woodcroft’s ideas on how to defend through the neutral zone, but also how they forecheck in different layers, and it has led to a significant reduction in goals against. If they want to be a legit playoff contender, their 5×5 goals against/game needs to hover around 1.7-1.85/game.
Advertisement
Ad
Advertisement
Ad
Calgary is second in the NHL at 1.64, while Carolina (1.69), Tampa (1.71), Los Angeles (1.72), Nashville (1.75), New York Rangers (1.77), Washington (1.78), Colorado (1.79) and Pittsburgh (1.80) are all 1.80 are lower.
Having a low 5×5 GA/game won’t guarantee success, as Vancouver leads the league at 1.63, but more often than not limiting goals against 5×5 is a constant for teams who win the Cup. Vancouver’s penalty kill is literally killing their playoff chances. They’ve allowed 47 power play goals and are a woeful 70.4% on the PK. It is remarkable how a team can be so good preventing goals 5×5, but so inept on the PK.
The Canucks are an outlier.
Look at the last 10 Stanley Cup winners.
The 2017 Penguins were 17th in GA/game, but they were so good offensively they still were a dominant +35 in 5×5 GF-GA. The 2012 Kings’ 5×5 offence was putrid in the regular season, but they didn’t give up anything defensively. And then in the playoffs they outscored teams 34-23 at 5×5. They only allowed 23 goals at 5×5 in 20 playoff games. A sizzling 1.15 GA/GP. Ridiculous.
Advertisement
Ad
Advertisement
Ad
On the season the Oilers are -3 in GF-GA differential at 5×5 (111-114), but under Woodcroft they are +9. The early signs have been very positive and if it continues the Oilers’ odds of getting home ice advantage in the first round of the playoffs increases significantly.

Foegele – McDavid – Hyman
Kane – Draisaitl – Yamamoto
Benson – McLeod – Ryan
Shore- Malone
Nurse – Barrie
Keith – Ceci
Niemelainen – Bouchard
Lagesson
Koskinen
Duncan Keith will play his first game since crashing into the end boards v. Chicago on February 9th. Kailer Yamamoto skated this morning and is a game-time decision according to Woodcroft. Brad Malone makes his season debut after being recalled from Bakersfield. It will be Malone’s 200th NHL game and his first since April 6th, 2019. Malone can kill penalties and plays an aggressive in-your-face style. Woodcroft really liked him in Bakersfield, and a few months ago he said on my show that Malone had really improved his play. This morning Malone mentioned he altered his off-season workouts with more emphasis on cardio and he tweaked his diet and he feels it has helped him be quicker on the ice.
Advertisement
Ad
Advertisement
Ad
Brendan Perlini, Colton Sceviour and Philip Broberg come out.
Mikko Koskinen deservedly gets the start in goal. He is 6-0-1 in his last seven starts.

Farabee – Giroux – Atkinson
Lindblom – Laughton – Konecny
Van Riemsdyk – Brassard – Mayhew
Ratcliffe – Brown – MacEwan
Provorov – Braun
Sanheim – Ristolainen
Yandle – Seeler
Hart
The Flyers have struggled for the past two months with an ugly 3-14-5 record. Claude Giroux will play his 993rd game with the Flyers tonight. He is scheduled to play game 1,000 on Thursday, March 17th v. Nashville. And then he and the Flyers will decide if he is getting traded. He’s an elite faceoff man who can still contribute offensively, but he carriers an $8.275m cap hit. Even if the Flyers retain 50%, any team acquiring him is taking on a big hit. It will be interesting to see if Colorado (the team we keep hearing connected to him) can make a deal to grab him. I’d argue the Avs need a skilled D-man with size more than Giroux, but maybe they add both.
Advertisement
Ad
Advertisement
Ad
Giroux is poised to become only the second player to play 1,000 games with the Flyers. Bobby Clarke scored 1,210 points in 1,144 games with Philly. He is their all-time leader in games played, assists (852), points and he is fourth in goals (358) and penalty minutes (1,453).
Giroux will likely have his jersey retired by the Flyers when his career his over, but he could be playing the final weeks of his career in the orange, black and white.