Getting Nuge Going and Other Game 2 Adjustments 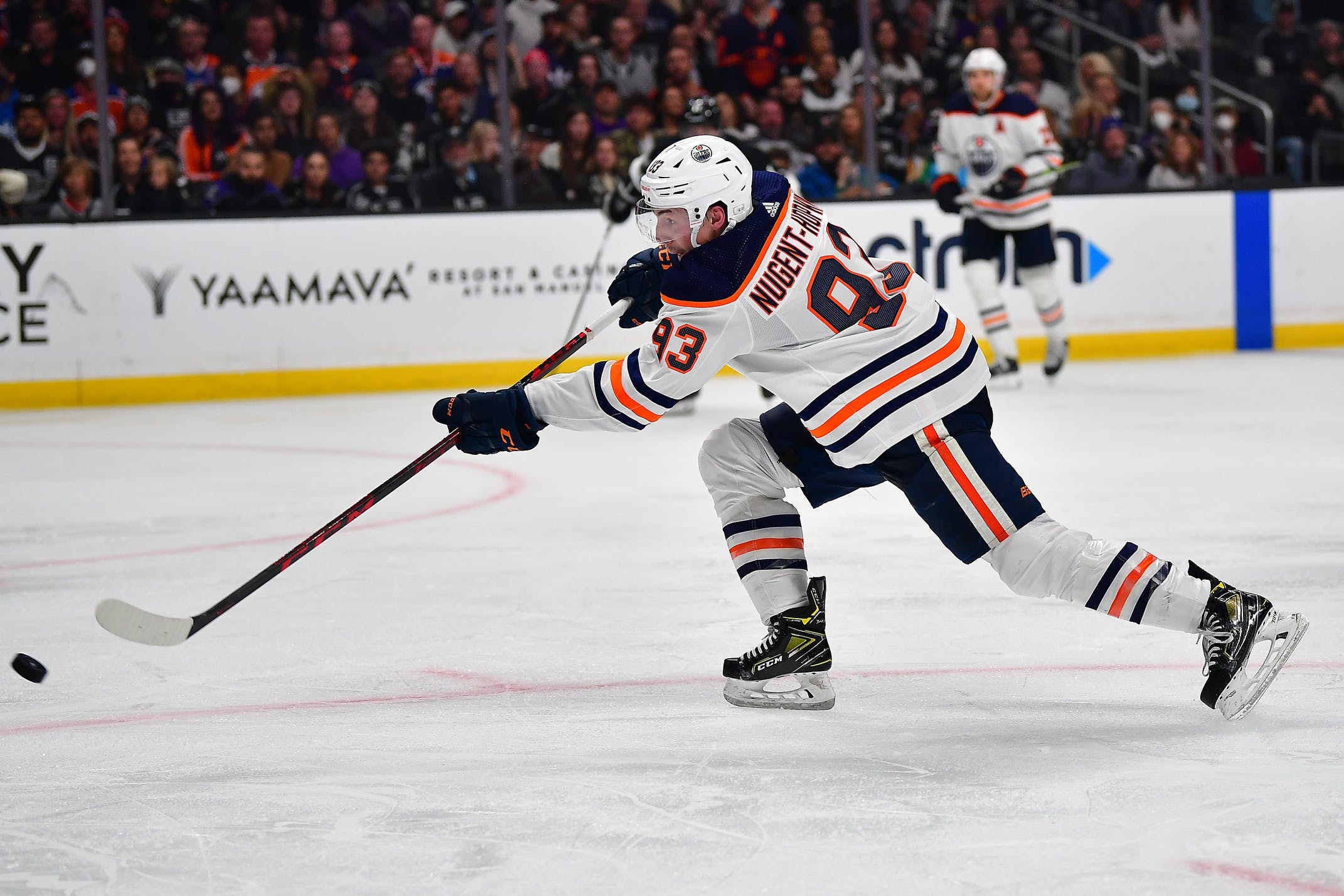 By Tyler Yaremchuk
6 months ago
@Leon Draisaitl is not himself right now. The injury he’s playing through is clearly hindering his ability to contribute at the level he was during the regular season and while you can’t argue with the fact he’s still making a positive impact on the game, the Oilers need some other players in their lineup to start playing better in order to make up the difference. One player in particular who should be feeling the pressure to bring their game to another level is @Ryan Nugent-Hopkins.
Tonight will be Nugent-Hopkins 30th career playoff game and the Oilers will need it to be miles better than his 29th career postseason game. His inability to control the puck in his own end early in Game 1 more or less directly led to the Flame’s second goal of the game and he was just a few strides away from @Blake Coleman on the Flame’s fourth goal. For a player who’s paid to be reliable in his own end, he was in frame for two important goals in that hockey game.
Not only do they need Nugent-Hopkins to be solid in the defensive zone, but they’ll also need him to start producing offence as well. The Oilers will not be able to win this series on the back of Connor McDavid alone, they’ll need secondary sources of offence. Leon Draisaitl is not going to be able to drive his own line so someone else will need to carry the load when McDavid isn’t on the ice. That player needs to be Nugent-Hopkins.
Now, this certainly isn’t all on the player. Jay Woodcroft needs to change how he’s using #93.
The trio of @Josh Archibald, Ryan Nugent-Hopkins, and @Derek Ryan should never see the ice together again. They’re continually getting caved at 5v5 and I don’t think it will magically get better.
According to Natural Stattrick, the trio has played 41 minutes together at 5v5 during the playoffs and while the score is 1-1 when they’re on the ice, the shots are 21-13 for the opposition and the scoring chances are 29-9.
In short: they’re lucky that they haven’t been outscored by a lot.
When Nugent-Hopkins has been on the ice WITHOUT those two wingers, the Oilers have outscored the other team 2-0, outshot them 29-11, and the scoring chances are 21-15. Nugent-Hopkins can help the Oilers make a positive impact, he just needs to be surrounded with skill, not with fourth-line grinders.
So who should Nuge play with? While some say @Jesse Puljujarvi would be a good choice, I’m not sold. The numbers are good, but Puljujarvi doesn’t look like himself and has been whiffing on pretty much every chance he’s been getting in the offensive zone. I wouldn’t be against putting him with Nugent-Hopkins, but I’m not sure if it’s the best move.
Instead, I would look to load up a second line with @Evander Kane and @Zach Hyman playing next to Nugent-Hopkins. That trio has only seen about six minutes of 5v5 ice time together in the playoffs but they’ve managed to outshoot the opposition 11-1 in that span and they have a goal.
Furthermore, Nugent-Hopkins’ numbers with just one of those two players on the ice are solid.
5v5 TOI
(playoffs only)
Obviously, those Kane/Hyman numbers are great because they’ve been playing with either McDavid or Draisaitl for almost all of those minutes. But the point stands: putting those three players together on a second line could work well for the Oilers.
That would leave Draisaitl-McDavid-Yamamoto as the top line, which works.
For the bottom six, I would run this:
Foegele-McLeod-Puljujarvi
Ryan – Kassian/Archibald
I would scratch one of Archibald or Kassian and keep going with 11 forwards and seven defensemen. I like the physicality that they both bring, but having them point in the lineup isn’t needed. This would allow you to roll McDavid with either one of these bottom six pairs of wingers and get more production than if you ran all three of Ryan, Archibald, and Kassian on the fourth line.
This also keeps seven defensemen in the lineup, which they need to keep doing.
@Darnell Nurse is labouring right now and Frank Seravalli is reporting that he could be playing through a core-muscle issue that might require surgery this summer. They need to make life easier on Nurse, which brings me to the second lineup adjustment I believe they should be making in game two.
I would put @Brett Kulak on a pairing with @Cody Ceci and make them the go-to shutdown pairing for the team. In Game 6 against LA, when Nurse was suspended, the duo played over 13 minutes together and the numbers were solid. Shots were 13-8 and the Kings didn’t score a goal despite the fact they started more shifts in the defensive zone than both the offensive zone and neutral zone combined.
I would then move Nurse to a pairing with @Tyson Barrie, who has had some really good games during this playoff run. This duo obviously has a lot of experience together and can be used mainly in the offensive zone or on shifts with Connor McDavid to make life easier for Nurse.
Adjustments are key to winning a playoff series. When you see the same team every night for two weeks, you need to find ways to throw them off and gain advantages. I believe with a few minor tweaks to the lineup, Woodcroft can make the Oilers much more competitive than they were in Game 1 of this series.