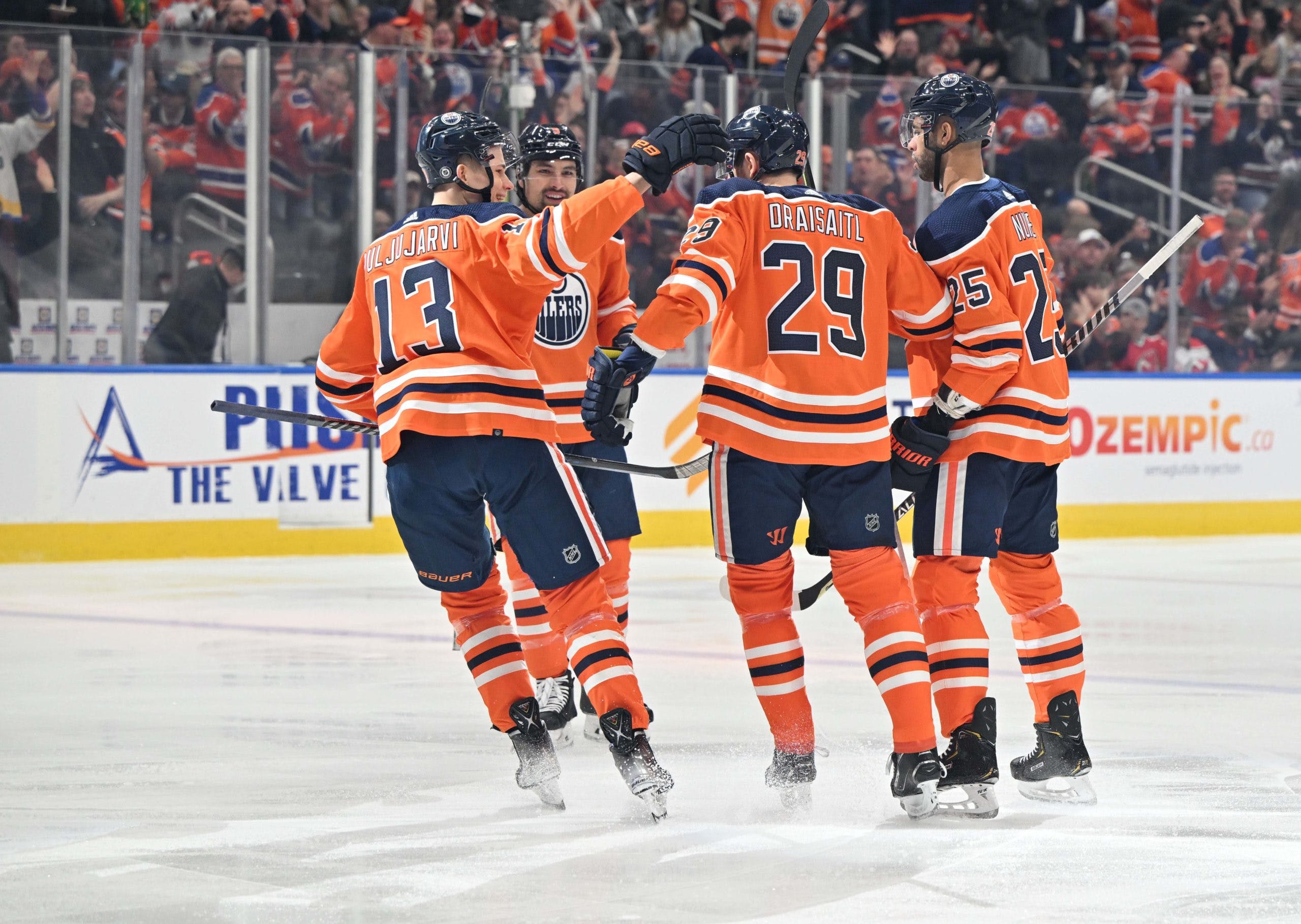 Photo credit: Walter Tychnowicz-USA TODAY Sports
By Zach Laing
10 months ago
Comments
That’s a perfect homestand. Final score: 6-3.
Nice work by the Oilers for not only getting out to the early lead, but sticking with it after being down early in the third. BaggedMilk has the Wrap Up.

jesper bratt gets behind duncan keith for a breakaway and capitalizes. 1-1. pic.twitter.com/e5EWOUmq7Y

leon draisaitl is a bad man. strong tracking back into the neutral zone for the steal, turns up ice, drops a dude's draws and almost goes between the legs for a score. #deutschlanddangler pic.twitter.com/UakbgfIqYi

help me make sense of this. kailer yamamoto gets clipped with a high-stick, no call. zack kassian finishes a check, gets called for a high-stick. pic.twitter.com/iInLOzD1Bz

early in the third and the devils score a pair of goals for a 3-2 lead. pic.twitter.com/QlZQC4HSAK

evander kane is officially on hatty watch! his second of the game gives the oilers a 4-3 lead. pic.twitter.com/r8GDQLO8H2

On how much difference scoring first has made: “It’s very obvious I think that we like playing with the lead. It feeds into our game a little better. It got a little away on us for a couple minutes in the third, but good teams find ways to win. At the end of the day, it’s two big points for us.”
On the 5-0 homestand: “It was a big stretch for us, right? Important games, some good teams in here. This was a really good stretch for us. That being said, we’re focused on next game. We’ve got two hard opponents coming up in a back-to-back. we got to make sure we’re ready for that.”
Advertisement
Ad
Advertisement
Ad
On the 3rd period comeback: “You don’t ever want that to happen. That’s not ideal, but they got some shifty players that can make plays. I think maybe we fell asleep for a second there. I thought our team did a good job grabbing it again and putting it back together.”
On what’s working for the Oilers: “I think we’re just playing very connected hockey right now. Everyone knows their role, everyone knows the system, everyone knows the way we want to play and the way we can be successful. We can truly beat any team. We’re getting healthy, which helps a lot. I think everyone is just in their spots now and hopefully, we can stay healthy for the stretch run here.”
On Evander Kane, his scoring touch: “He’s been big for us. He gives you a top-six winger, right? Those are hard to find especially with his physicality and the way he plays the game. Those are hard to find, hard to come by. We’re very lucky to have him. He knows how to score. I think that’s the easiest way to say it. He finds the right areas, he knows how to score. He’s done it for a long-time. He’s been big for our team.”
Advertisement
Ad
Advertisement
Ad
On if there’s a maturing process going on with the Oilers: “I think that part comes with a little confidence, right? When you get a couple wins in a row, you get a little streak going — you know you can come back from a bad shift, or from getting scored on. I think we’re growing in that area of the game. It obviously makes us a better team.”
On hitting the ref with the puck: “it’s just a really unlucky play, i hope he’s okay. i obviously didn’t mean to hit him. i have nothing against him at all. I just hope he’s okay. I’m going to try and go see him.”
On the team is rounding out: “We’re getting healthy, which helps. We were missing some big-time players in our lineup that eat a lot of important minutes. Everyone is kind of slotted in where they’re supposed to be right now. We can’t wait to get nuggy back in there as well. He’s obviously a great player and he’s going to help us a lot. we got to keep this rolling. There’s still a bunch of games left.”
Advertisement
Ad
Advertisement
Ad
On how they view the deadline, players maybe being bumped out of the lineup: “It’s a weird time for everyone. For some players maybe a little more than others. We’re focused on our game right now, we’re looking to get better. Whatever happens, happens. That’s part of the business. I think everyone, I hope everyone understands that part.”

On the difference he’s noticed in the Oilers since he joined: “I think there was a tough stretch before i got here. These guys got off to a great start early in the season, but I think a couple wins in a row can really change the mindset and get that belief a little higher. We got healthy and started playing a lot tighter as a unit of five and I think it’s really helped our game. it’s led to some success.”
Advertisement
Ad
Advertisement
Ad
On what he feels he brought to the team: “That’s not necessarily for me to judge, I just try to bring my attributes to the team and any team I’m on and try to be a positive player for our group.”
On the Oilers having pushback in their game: “I think it’s believing. we can score goals, we know that. I think it’s really just about playing a certain way, having the right attitude and staying with that attitude no matter how bounces go in a game. You look at the third period. We come out, know what we need to do, but they get a couple of bounces and take the lead. We stick with our game plan, we get pucks to the net, we turn up the heat a little bit, stay with it and we were able to respond. It has been a good homestand for the most part. You look at the teams we played, you can say they’re not very good, but those are tough games. I thought it was a good test for our group and now we go on the road.”
Advertisement
Ad
Advertisement
Ad
On the homestand, if there’s some confidence coming from it: “For sure. Nobody is ever going to complain about winning. We’re happy with that, but like I said, those are some tough games to play. Every point, especially with the position we’re in, is very important. We took care of business at home, and now we get to go on the road and play two really good teams.”
On being 2-5-1 coming into the homestand, what turned it around: “The way we ended off that road trip in Chicago was disappointing. Coming back home and losing against montreal was tough, but we knew the position we’re in. Teams are starting to pull away from us and we needed to climb back into that race. We are in a good position now, but it’s definitely nothing to be satisfied about.”
Advertisement
Ad
Advertisement
Ad
On the potential he sees in this Oilers team: “I see great potential in this team, that’s why I came here. I think you’re starting to see what it can look like as we continue to grow our game and become even tighter as a team in the way we play. I think we’re going to be a tough team to beat.”
On if he thinks the oilers need to add at the deadline: “Guys, that’s not my job.”