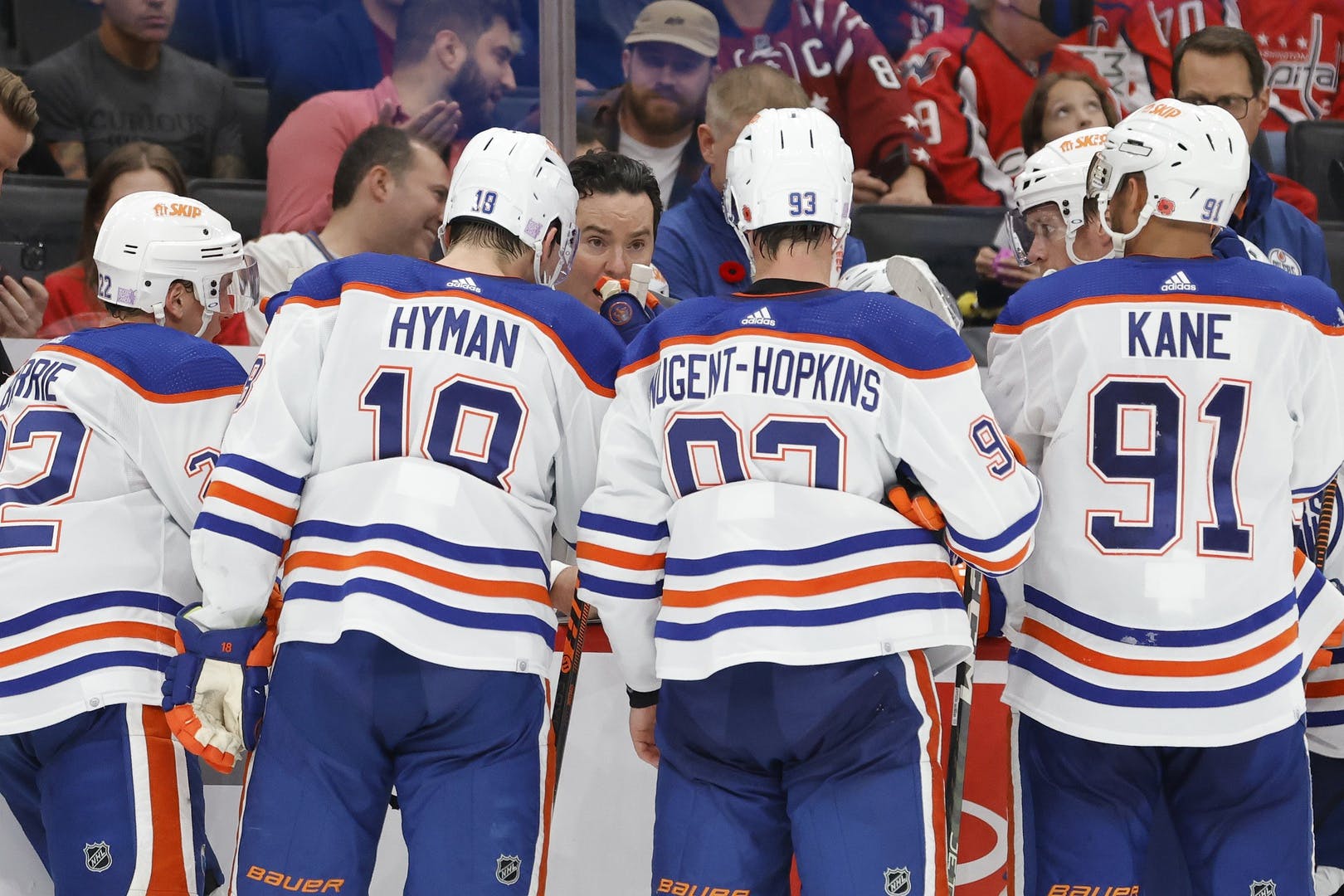 Photo credit: Geoff Burke-USA TODAY Sports
By Jason Gregor
2 months ago
Comments
The Edmonton Oilers have simply not been good enough through the first 20 games. The only element of their game that has been acceptable is the power play. Their 5×5 scoring, 5×5 defending and penalty killing has been subpar.
The only positive for the Oilers is many teams in the Western Conference and Pacific Division are also struggling to find consistency in their games.
Vegas has a 13-point lead on the Oilers for first place, and while that isn’t insurmountable, finishing first in the division for the first time since 1987 seems more of a longshot now than it did when the season began.
Seattle has been the biggest positive surprise in the Pacific. They are 8-1-1 in their last 10. LA, like Edmonton, has only won half its games. Calgary has won eight of 19, but three OT losses give them a higher points percentage. All three organizations were hoping for better starts.
Vancouver has had another slow start, and if Thatcher Demko doesn’t find his game their struggles will continue.
Advertisement
Ad
Advertisement
Ad
However, the Oilers can’t control what other teams do. They need to focus on themselves and simply execute more consistently.
Their first 20 games haven’t been close to good enough.
The only reliable aspect of their game is the power play. It is fourth in the NHL at 29.2%. They’ve scored a PP goal in 14 of 20 games. But the rest of their play has been below average.

The penalty kill has been dreadful all season. It’s allowed a PP goal in 15 of 20 games. The PK is 72.2% overall. It is 82.6% over the past seven games, so maybe it is starting to wake up, but until they remain over 80% or higher for 20+ games I don’t think we can say the PK has found consistency.
They are tied with Nashville for 27th in 5×5 goals/game at 1.7. They have 34 goals in 20 games. Even Connor McDavid is well below his usual 5×5 point totals through 20 games. He has 11 points in 20 games, which prorates to 44 in 80 games. Last season he had 58 in 80 games and the year before he had a ridiculous 56 points in 56 games. McDavid has been on the ice for 13 goals for and 14 goals against, which his well below his GF-GA from the previous two seasons at 5×5
Advertisement
Ad
Advertisement
Ad
2022: 73-50
2021: 64-48
I think McDavid has played well, but by his standards his personal 5×5 production is down. His goals/60 is the second lowest of his career at 1.13 and his assists/60 (0.94) is the lowest of his career. His previous low was 1.60 in his rookie season.
His 2.07 points/60 is the lowest of his career by far. His previous low was 2.62. The good news for Oilers fans, however, it is very unlikely McDavid’s 5×5 production remains this low.
They have created the same number of high-quality chances, but they aren’t finishing. But his goals against are up, and his on-ice Sv% is virtually the same as last season. The one difference is he is starting in the offensive zone less frequently than in the past. Much of that is due to more neutral zone faceoffs, but he’s also had a few more D-zone starts.
Advertisement
Ad
Advertisement
Ad
But let’s be clear: McDavid is the least of the Oilers issues. I’m just mentioning him because it illustrates how ineffective this team has been at 5×5. Usually, when they struggle at 5×5, his numbers don’t reflect it.

Nov 21, 2022; Newark, New Jersey, USA; New Jersey Devils left wing Tomas Tatar (90) celebrates his goal with teammates during the third period against the Edmonton Oilers at Prudential Center. Mandatory Credit: Vincent Carchietta-USA TODAY Sports
Edmonton is 25th in goals against/game at 2.2. The team’s 5×5 defending continues to be a problem. And it is across the board.
The teams below them include Chicago (2.31), Vancouver (2.35), Montreal (2.4), Anaheim (2.65), San Jose (2.68) and Columbus (3.26). The benefit for the Oilers is that 26.8% of their remaining 62 games are against these six teams. But unless they figure out how to play more sound defensively against other teams their struggles will continue.
They have continually gifted teams too many easy goals at 5×5. All players are responsible, whether it is turning the puck over at the offensive blueline leading to odd-man rushes, giving up the blueline to attacking forwards, missed assignments on backchecks, lost battles in the corner or in front of the net or shoddy goaltending. They need a stronger commitment to execution.
Advertisement
Ad
Advertisement
Ad
Darnell Nurse must play better. He logs the most minutes. He takes on the toughest minutes, but that is his job and through 20 games he hasn’t played consistently up to his capabilities. He needs to make better reads, be more aggressive and also make better decisions with the puck. I think his offensive play has been fine. He’s joining the play and contributing offensively, but his D-zone play has to improve. He’s been on for 19 goals against, which is tied for the team lead with Leon Draisaitl.
Evan Bouchard is struggling in the offensive zone. He usually is very good at getting pucks on net, but this year he’s challenging the original Shinpad Assassin, Andrej Sekera, for his title. Bouchard has fired 102 shot attempts on goal, with 44 being on net, 15 missing the net and 43 blocked. I think his offensive game, his forte, is impacting his defensive zone coverage as he’s not playing with the same level of confidence.
Advertisement
Ad
Advertisement
Ad
The only healthy forward who has been on the ice for more goals for than against is Devin Shore (3-2). Klim Kostin is 1-1, but the other 10 forwards currently playing have all been outscored 5×5. You can try to find excuses for different players as to why they are getting outscored if you like, but not enough forwards are outscoring the opposition 5×5.
Shore: 3-2
Kostin: 1-1
McDavid: 13-14
Draisaitl: 19-19
RNH: 13-16
Hyman: 15-19
Foegele: 5-9
Ryan: 3-6
Janmark: 1-2
McLeod: 4-9
Holloway: 2-8
Puljujarvi: 4-14
Evander Kane (10-7) is out for another three months, and Kailer Yamamoto’s mystery injury has no timeline. It was supposed to be day-to-day, and he’s missed the last six games and won’t play on Saturday. Yamamoto (9-5) has struggled scoring goals this season, but I’d still want him in the lineup when healthy. He still scored 20 goals last year and they don’t have anyone who can replace his offensive potential.
Advertisement
Ad
Advertisement
Ad

I’ve noticed many discussing the Oilers’ strength of schedule. Was it that much more difficult than other Pacific teams they are battling with?
Let’s compare their schedule to that of the other top-six teams in the Pacific Division.
Edmonton played 20 games and 16 (80%) of those games were against teams who have points% of .500 or better.
Calgary played 17 of 19 games (89.4%).
LA played 18 of 22 (81.8%).
Seattle played 14 of 19 (73.6%).
Vancouver played 12 of 20 (60%).
Vegas played 12 of 21 (57.1%).
Calgary and LA have had a tougher schedule, while Vegas, Seattle, and Vancouver have faced fewer competitive teams. But you still have to win those games.
Currently, there are 10 teams below a .500P%: Buffalo, Washington, Philadelphia, Arizona, Vancouver, Columbus, San Jose, Chicago, Ottawa, and Anaheim.
Here are the remaining schedules for the Oilers and their five Pacific Division foes:
Advertisement
Ad
Advertisement
Ad
Edmonton has 23 games remaining against those teams with 11 on the road and 12 at home.
Calgary has 26 games remaining with 13 at home and 13 on the road.
LA had 22 left with 12 at home and 10 on the road.
Seattle has 20 remaining with nine at home and 11 on the road.
Vancouver has 16 left with nine at home and seven on the road.
Vegas has 15 remaining with eight at home and seven on the road.
Vegas has been the biggest benefactor thus far, but Calgary, LA, and Seattle have had similar quality of competition and those are the teams the Oilers are going to battle over the final 62 games. Vegas has a 13-point lead on the Oilers, and while they do have a tougher remaining schedule, the Oilers, Flames, Kraken, and Kings will have to dominate the lesser teams like Vegas has if they hope to challenge them for first in the division.
Advertisement
Ad
Advertisement
Ad
The quality of competition doesn’t excuse the Oilers’ lack of execution, specifically in the defensive zone. If they “gift” goals to weaker teams it will be difficult to defeat them too. Edmonton needs to tighten up its play in the second quarter of this season.