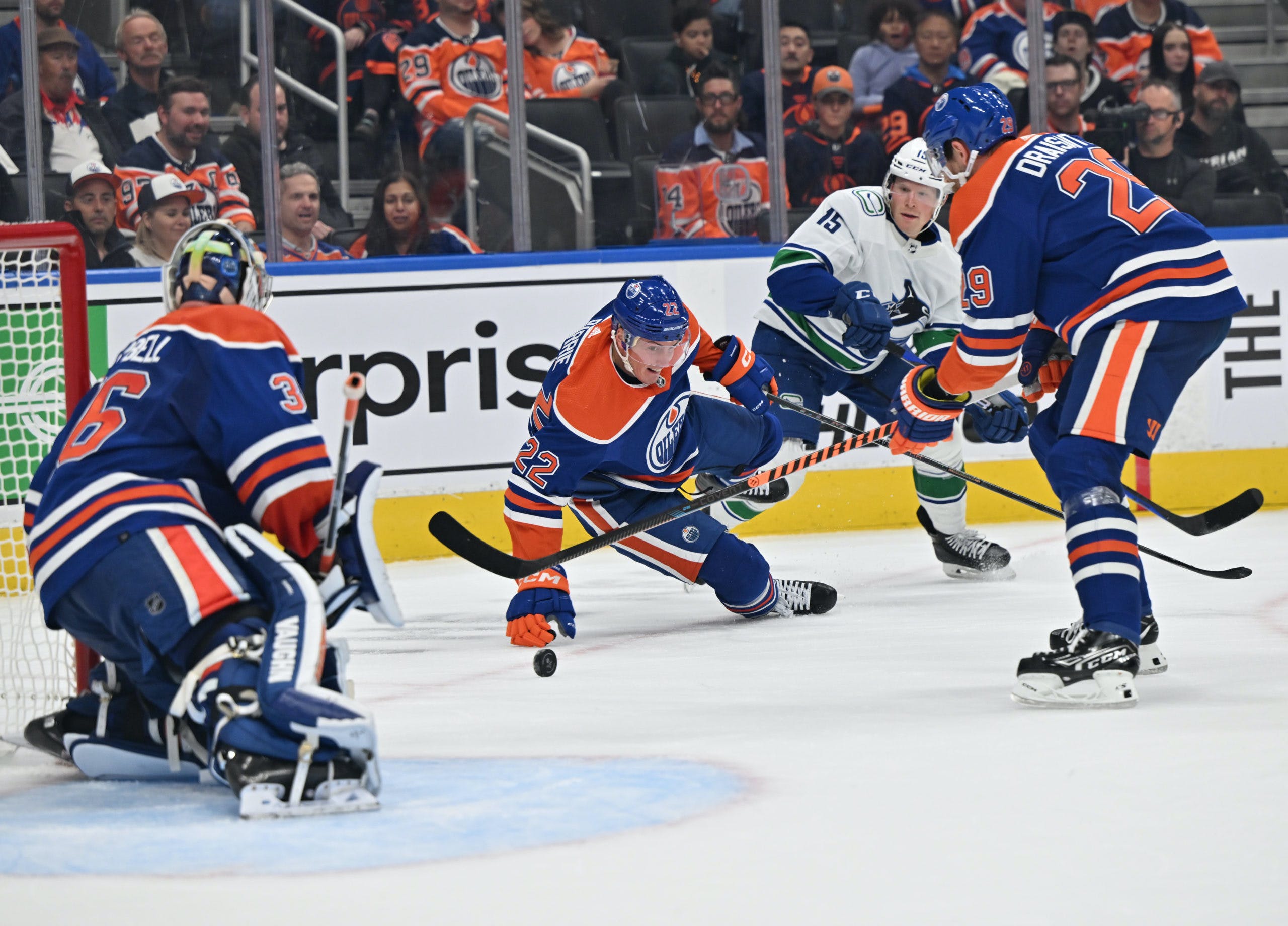 Photo credit: © Walter Tychnowicz-USA TODAY Sports
By Jason Gregor
1 month ago
Comments
The Oilers’ 43rd regular season begins tonight, and the expectations from the fanbase and pundits is higher than I can recall in many years. The Oilers have, arguably, the most offensive depth since the 1980s, and with Jay Woodcroft and Dave Manson on the bench for a full season, the expectation is the Oilers’ improved defensive play since their arrival last February should continue.
We have 82 games to find out.
— This is the fourth consecutive season the Oilers begin the campaign with a home game against Vancouver. In 2019, Edmonton defeated Vancouver 3-2, in 2020 Vancouver won 5-3 and last year Edmonton won 3-2 in a shootout after allowing two goals in the final eight minutes of the third.
— Edmonton is 23-15-4 in season openers, and Vancouver is 27-18-4-2.
Advertisement
Ad
Advertisement
Ad
— McDavid is looking to become only the 16th player in NHL history with six 100-point seasons. If he reaches the century mark, he will join this select group.
6: Sidney Crosby, Phil Esposito, Dale Hawerchuk, Jari Kurri, Guy Lafleur, Mark Messier, Bobby Orr, Joe Sakic, Bryan Trottier and Steve Yzerman.
7: Mike Bossy and Peter Stastny
8: Marcel Dionne
10: Mario Lemieux
15: Wayne Gretzky
He has a legitimate chance to join Lemieux and Gretzky as the only players with 10 or more seasons of 100 points.
— McDavid sits fifth on the Oilers all-time scoring list with 697 points in 487 games, and he will likely pass the 700- and 800-point plateau this season. He will finish the season fifth on the Oilers list trailing Glenn Anderson (906 points), Mark Messier (1,034), Jari Kurri (1,043) and Gretzky (1,669). He should pass Anderson next season, and if he signs an extension with the Oilers, he could catch Gretzky.
—Leon Draisaitl is currently eighth with 616 points. He will pass Ryan Smyth (631) and Paul Coffey (669) and sit sixth. Ryan Nugent-Hopkins is currently 10th with 528 points and needs 50 points to pass Doug Weight (577) for ninth.
— If Draisaitl scores 50 goals this season, he will become the 21st player to have three 50-goal seasons and join these fellow snipers:
Advertisement
Ad
Advertisement
Ad
3: Jaromir Jagr, John Leclair, Cam Neely, Luc Robitaille, Teemu Selanne and Rick Vaive.
4: Michel Goulet, Tim Kerr and Kurri.
5: Pavel Bure, Bobby Hull, Brett Hull, Esposito and Yzerman.
6: Dionne, Lafleur and Lemieux.
9: Alex Ovechkin, Bossy and Gretzky.
— If Draisaitl scores 50 goals and 100 points he’d be only the 14th player to do it three times.
3: Goulet, Jagr and Robitaille.
4: Brett Hull, Kurri and Ovechkin.
5: Esposito and Yzerman.
6: Dionne, Lafleur and Lemieux.
7: Bossy.
9. Gretzky.
— Darnell Nurse (192 points) needs 27 points to pass Steve Smith (218) for fifth most points by an Oilers defencemen. He should pass Charlie Huddy (363) and Kevin Lowe (383) at some point in his career, but I don’t see him catching Coffey (669).
— Edmonton must lower its 5×5 goals against. They allowed 2.18 in 2018, 2.14 in 2019, 2.16 in 2020 and 2.07 in 2021. They finished 19th last year allowing 173 (2.10/game). If they want to be top 10 they need to be around 153. In 38 games with Woodcroft, they’ve allowed 73 goals against (1.92), and that prorates to 157 in an 82-game season. Goal scoring shouldn’t be a concern for the Oilers, and if they want to take another step this season it will come by reducing goals 5×5.
Advertisement
Ad
Advertisement
Ad
— Could Dylan Holloway score 20 goals? If he does, he’ll be only the sixth Oilers rookie to score 20 goals joining Jason Arnott (33), Kurri (32), Anderson (30), Taylor Hall (22), and Dave Lumley (20).
A 40-point season would be a solid campaign. Edmonton has had 10 rookies score 40+ points with Hall (42), Jordan Eberle (43), Andrew Cogliano (45), McDavid (48) Sam Gagner (49), Nugent-Hopkins (52), Anderson (53), Lumley (58), Arnott (68) and Kurri (73).
—  Edmonton begins the season with only three new players who weren’t on the Oilers regular season roster last season: Holloway, Ryan Murray, and Jack Campbell. It is the fewest number of new faces in years. Holloway did dress for one playoff game, but he only played three minutes. To me, he’s a new player. Players who played at least 15 games (regular season or playoffs) who are no longer with the organization include Duncan Keith, Kris Russell, Zack Kassian, Mike Smith, Mikko Koskinen, Colton Sceviour, Kyle Turris, Brendan Perlini, William Lagesson, Derick Brassard, and Josh Archibald. Edmonton had 33 players play 10 or more games last year.
Advertisement
Ad
Advertisement
Ad
— Vancouver has had significant changes to their forward group. They’ve brought in Andrei Kuzmenko, Ilya Mikheyev, Curtis Lazar, Nils Aman and Dakota Joshua. Mikheyev is injured. Riley Stillman is their new D-man, but he might not play much once Tyler Myers and Travis Dermott are healthy.
Vancouver had 30 players play 10+ games last year and those no longer with the team include Alex Chiasson, Brad Hunt, Tyler Motte, Juho Lammikko, Matthew Highmore, Jason Dickinson, Travis Hamonic, Brad Richardson, Justin Dowling, Sheldon Dries, Nic Petan, William Lockwood, Justin Bailey and Jaroslav Halak.
— Vancouver was tied for seventh in GA/game last season at 2.82, and they were 18th in GF/game at 3.00. Edmonton was 7th in GF/game at 3.48 and 18th in GA/game at 3.06.
— If you are wondering why Edmonton waited until today to recall Devin Shore and reassign Philip Broberg, it is a CBA rule. If you are an LTIR team, you can’t call a player up the day after the original roster is set. You have to wait a day. If Edmonton had played yesterday, they wouldn’t have been able to recall Shore. Another odd quirk of the cap.
Advertisement
Ad
Advertisement
Ad
— Edmonton didn’t recall Markus Niemelainen and send down Brad Malone, because they aren’t sure about the availability of Kailer Yamamoto and Warren Foegele, so they opted to go with 13 forwards and six D-men on the roster for now. Niemelainen could be recalled before Saturday depending on health. With a 21-man roster, Edmonton will have to make these types of roster decisions often this season.

For the first time in three seasons, we’re throwing a Season Launch Party at SOHO and you’re all invited to join us! What’s going on? I’m glad you asked.

As always, we will also be including a charity component with the event where a portion of all ticket sales will be donated directly to Sport Central to help with their mission of providing equipment and bicycles to children in need.