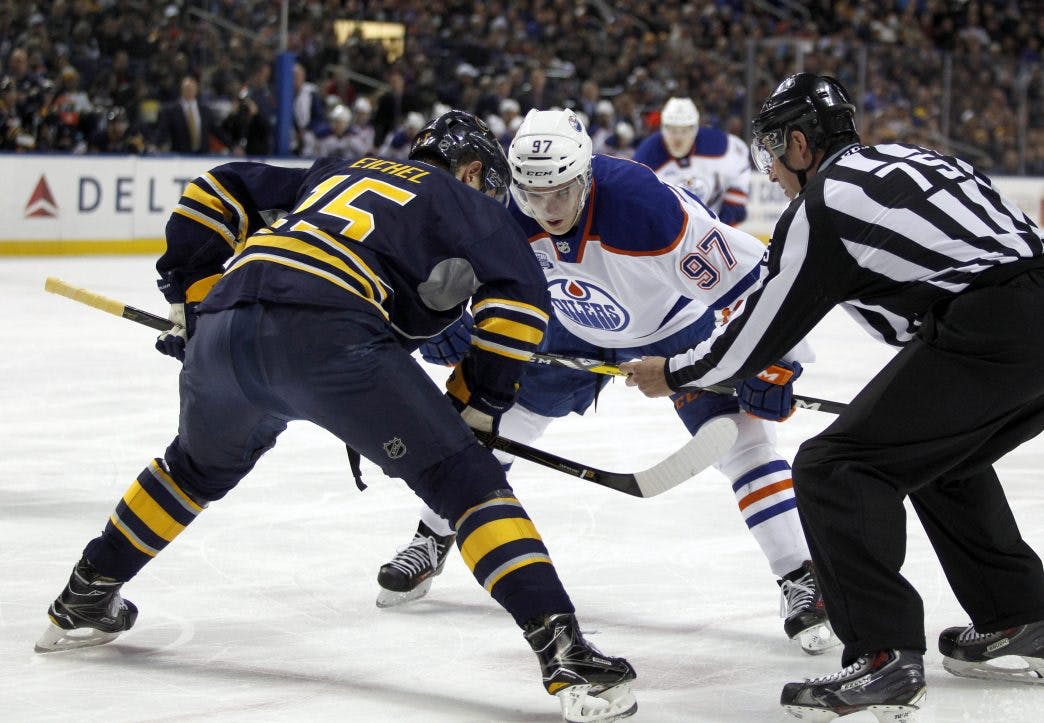 Photo credit: Timothy T. Ludwig-USA TODAY Sports
By Jason Gregor
5 years ago
Comments
A loss tonight in Buffalo would basically waste the good effort the Edmonton Oilers had in Detroit on Wednesday. They can’t afford it. The Sabres have lost seven games in a row, two in overtime and five in regulation. They are struggling, but the Oilers can’t take them lightly. Edmonton is not good enough to just show up and expect a victory.
Rasmus Ristolainen, their best defenceman, returns to the lineup after missing nine games and that will give the Sabres a boost. I see this as another must-win game, even though it is only November. Edmonton simply can’t afford to lose against the 30th place Sabres.
They need the same desperation and determination we saw in Detroit, and they will need a solid game from Laurent Brossoit. He gets his third start of the season. He was solid in his last start in Washington, but he allowed six goals coming off the bench versus the St. Louis Blues. The entire team was beyond terrible that game, but Brossoit still needs a bounce back performance.
Advertisement
Ad
Advertisement
Ad
If he struggles, Peter Chiarelli will have to strongly consider finding another backup. Tonight will be Brossoit’s sixth appearance of the season.
He has had two starts.
October 17th versus Carolina. Allowed five goals on 21 shots in 57:49. Finished with a .762sv%
November 12th @ Washington. Allowed one goal on 19 shots in 65:00 for a .947sv%
He’s replaced Cam Talbot three times.
October 7th @ Vancouver. Stopped all 19 shots in 37:56. 1.000sv%
October 14th vs. Ottawa. Allowed two goals on eight shots in 18:56. .750sv%
November 21st @ St.Louis. Gave up six goals on 37 shots in 52:25 to finish with a .838sv%.
Last season in eight appearances, four starts, he finished with a .928sv% and 1.99 goals against average.
Tonight is only his 13th NHL start, so it is difficult to say how good or bad he will be, but his sv% in 12 starts and 19 appearances is .900. Adapting to the role of backup is very difficult, because Brossoit has always been a starter at every other level. He is used to playing every few days, not once every two weeks, but that is the reality for a backup. You don’t have many opportunities, and when you do get in you need to play well to earn the trust of the coach.
Advertisement
Ad
Advertisement
Ad
Cam Talbot leads the NHL with 20 starts, and despite him struggling this season, Brossoit has only started twice prior to tonight. And Talbot has the flu, or he might be starting his 21st game tonight.
Brossoit could require a good, if not great, performance tonight to keep his job.

Lucic-McDavid-Caggiula
Maroon-RNH-Draisaitl
Khaira-Strome-Puljujarvi
Cammalleri-Letestu-Kassian
Nurse-Larsson
Russell-Benning
Auvitu-Gryba
Brossoit
Oscar Klefbom has the flu and will be a game time decision. The new line combinations worked well in Detroit with every forward, except Nugent-Hopkins, picking up a point. Maybe that will be the starting point for the bottom six to start contributing more offence.

Kane-Eichel-Pominville
Pouliot-O’Reilly-Reinhart
Girgensons-Larsson-Criscuolo
Nolan-Jacobsen-Okposo
Scandella-Ristolainen
McCabe-Antipin
Beaulieu-Falk
Lehner
In 14 starts Lehner has a .898sv% and an ugly 3.08 GAA. Only four times has he had a sv% higher than .910 this season. Evander Kane is having a very good season with 12 goals and 21 points. He and Eichel create a lot with their speed and I’m looking forward to watching them battle Nurse and Larsson.
Advertisement
Ad
Advertisement
Ad

From Die by the Blade:

Does anyone remember what a win feels like? It’s been… well, a while. The Sabres haven’t won since November 7, a span of just over two weeks and seven games. Tonight, they’ll look to snap that seven-game winless streak, but it won’t be easy.
This is their longest winless streak of this young season so far. The last time the Sabres had this long a winless streak was February 28 – March 14, 2015. They snapped that streak at seven games with a 2-1 shootout win over the Boston Bruins on March 17.

GDB BROUGHT TO YOU BY SHERBROOKE LIQUOR