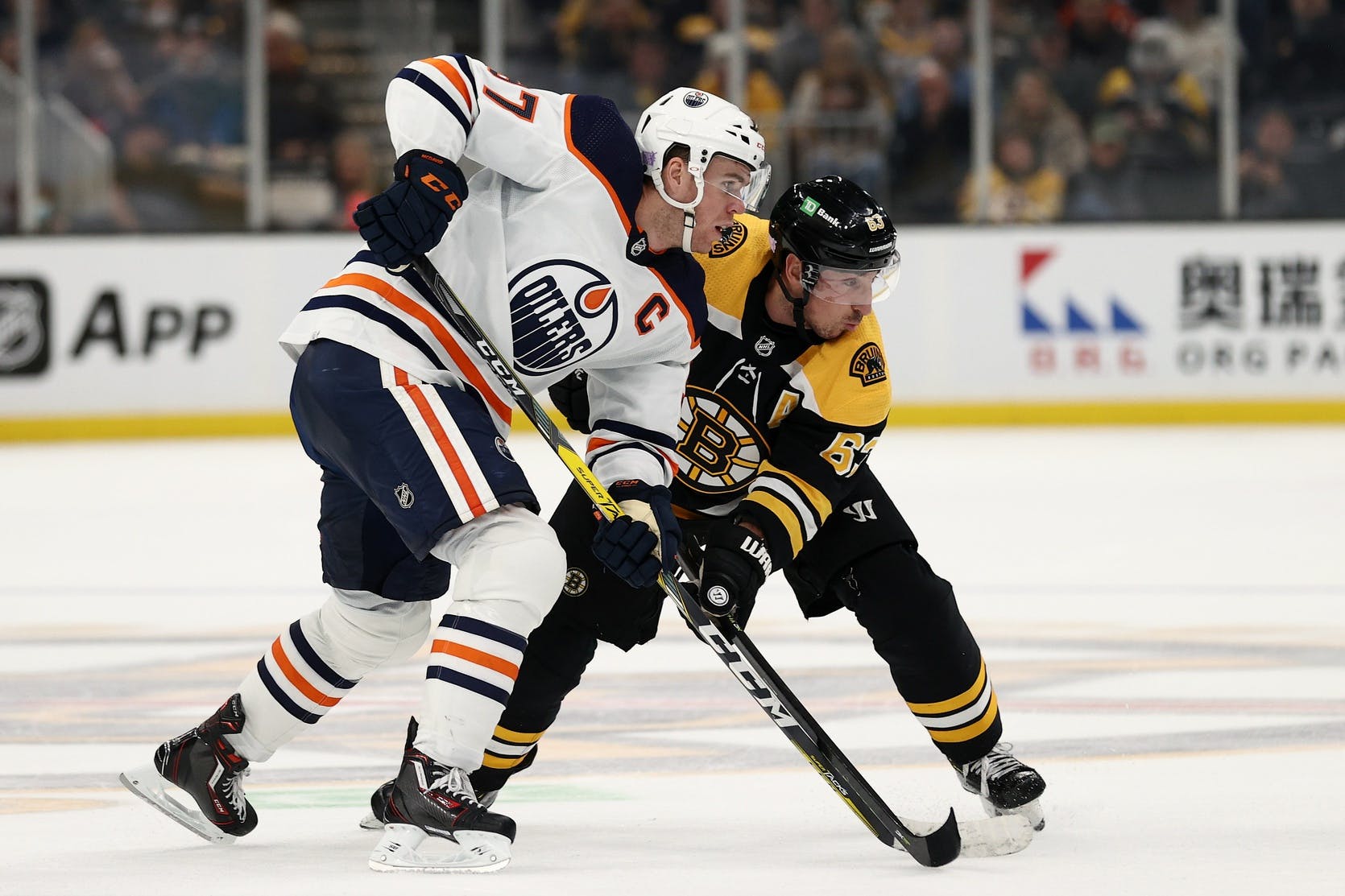 Photo credit: Winslow Townson-USA TODAY Sports
By Jason Gregor
11 months ago
Comments
Things can change quickly in the NHL. A week ago the Edmonton Oilers went to bed with the best points% in the Pacific division. They were one point behind Calgary, but three ahead of Anaheim and eight points up on Las Vegas.
This morning, after three consecutive losses, the Oilers are two points ahead of Vegas, one point behind Anaheim and three back of Calgary. Yes, the Oilers have games in hand on the Ducks and Flames, but a three-game losing streak suddenly has them in a much less relaxing position in the Pacific division.
Edmonton needs a win. A blowout. A high-scoring game. A snooze fest. It shouldn’t matter how they win as long as they win. And their power play needs to get back in rhythm.
There are many reasons they’ve suddenly struggled to win. Slow starts and allowing the first goal have crushed them, but their power play has suddenly gone ice cold. The Oilers are 1-for-16 in their past five games. They went 0-for-5 against Minnesota on Tuesday. Sometimes the puck won’t go in, but I think there might be more to the recent struggles on the man advantage.
Advertisement
Ad
Advertisement
Ad
Last game on two different PPs Glen Gulutzan and Dave Tippett opted to start the first unit, despite the top guys just finishing a hard 5×5 shift.
On their first PP of the second period, @Ryan Nugent-Hopkins and @Leon Draisaitl started their shift at 1:50 into the period. They were on the ice for 1:04 when the Wild got penalized. They remained on the ice to start the power play and their entire shift ended up being 2:19.
In the third period Connor McDavid started his shift at 7:57. The Wild were penalized at 9:26. He’d been on for 1:29. He was fatigued when the PP started. Either call a timeout or start the second unit. That morning I asked Draisaitl what the PP needs to do to get back scoring. “We have to get back to outworking teams and that creates the five-on-five kind of hockey that I think we are the best in the league at doing that on the power play,” he said.
Advertisement
Ad
Advertisement
Ad
It is difficult to outwork the PK when you start a power play already fatigued. I understand the urge to want to start the top unit. They are the best in the NHL, but that advantage is negated when they are fatigued. Add to that the recent struggles, and I wonder if starting the second unit when top guys just finished a shift, or calling them off after a minute (if the puck is cleared) is an option.
I definitely think starting them fatigued is a not a good plan. But what about the latter question of shorter shifts? I looked up all 24 power play goals this season and how long into the PP they scored. (I know 24 games and 24 goals isn’t a massive sample size, but it still is worth looking at.)
Advertisement
Ad
Advertisement
Ad
Advertisement
Ad
Advertisement
Ad
Oct 13th v. VAN. Goal comes 0:55 into PP.
Oct 16th v. CGY. Goal at 1:21
Oct 16th v. CGY. Goal at :08. (4×4 ended eight seconds before PP officially started while on the fly). Wasn’t full first unit as Foegele was out 4×4 with McDavid and remained out.
Oct 19th v. ANA. Goal at 1:51, by Zack Kassian and the second unit.
Oct 19th v. ANA. Goal at :24.
Oct 21st @ ARI. Goal came at :11.
Oct 21st @ ARI. Goal came at :47.
Oct 22nd @ LVK. Goal at :22
Oct 27th v. PHI. Goal at 1:02
Oct 30th @ VAN. Goal at 1:59 by Foegele and second unit.
Oct 30th @ VAN. Goal at 1:27.
Nov 1st v. SEA. Goal scored at :30.
Nov 3rd v. NSH. Goal at 1:58 with first unit.
Nov 5th v. NYR. Goal at :36.
Nov 5th v. NYR. Goal at 1:48 with first unit.
Nov 12th @ BUF. Goal at :30.
Nov 12th @ BUF. Goal at :58.
Nov 14th @ STL. Goal at :23.
Nov 16th @ WPG. Goal at 1:19. Was six seconds into a 5-on-3.
Nov 16th @ WPG. Goal at 1:22. Same PP sequence. McDavid and Draisaitl were on for 2:29 consecutive PP time, while RNH’s shift was 2:56. Oilers trailed 4-0 at start of PP, so made sense to stick with top unit after scoring on the first PP.
Nov 20th v. CHI. Goal at :32. They had been on a 5-on-3 for 20 seconds.
Nov 24th @ ARI. Goal at :49.
Nov 24th @ ARI. Goal at 1:07.
Dec 03rd @ SEA. Goal at :30.
The first unit has scored 22 of the 24 goals. They have scored 16 of them in the first 1:07 of the PP. Only two PP goals from the first unit have come after 1:27. Their PP is most efficient in the first minute, and then the efficiency drops significantly. With the recent struggles, it might be worthwhile shortening up their shifts. It might add some urgency to their play if they know they only have a minute. Of course, the time is dependent on if the puck exits the zone.
Advertisement
Ad
Advertisement
Ad
Draisaitl outlined how hard work, in conjunction with their elite skill, is what makes the PP so dangerous, but asking them to outwork the penalty killers when they start the PP after a one minute 5×5 shift is not a good plan. I know that isn’t the norm, but I noticed it twice on Tuesday and that can’t happen tonight. Start the second unit if the top guys just finished a shift. The first unit has scored 72% of their PP goals in the first 67 seconds of the power play, so their odds of scoring late diminish significantly. The team could be better off giving the second unit a bit more time. At least until the first unit starts scoring again.

Hyman – McDavid – Puljujarvi
RNH – Draisaitl – Yamamoto
Foegele – McLeod – Kassian
Shore – Ryan – Sceviour
Advertisement
Ad
Advertisement
Ad
Nurse – Bouchard
Russell – Ceci
Niemelainen – Barrie
Skinner
@Cody Ceci returns to the lineup after being in COVID-protocol for the past 10 days. It allows Kris Russell to move back to the left side. Russell’s numbers when playing the left side, compared to the right, are noticeably better. When playing the left side he was on for three goals against in nine games, but on the right side he was on for six goals against in four games. Russell played better when he played more minutes, against tougher competition when he filled in for Darnell Nurse, rather than on the right side in fewer minutes. Playing the off-side is more of a challenge and it illustrates the need for the Oilers to acquire another right shot defender heading into the playoffs.
Advertisement
Ad
Advertisement
Ad

Marchand – Bergeron – Pastrnak
Hall – Coyle – Smith
Haula – Frederik – Foligno
Debrusk – Lazar – Steen
Forbort –  McAvoy
Grzelcyk –  Carlo
Reilly – Clifton
Ullmark
The Bruins are struggling to score 5×5. Yesterday assistant coach Joe Sacco swapped Hall and Haula in the third period to try and get more offence. Sacco is filling in for head coach Bruce Cassidy who is in COVID protocol, so you wonder if that alters some of the in-game coaching decisions.

Photoshop: Tom Kostiuk
GAME DAY PREDICTION: Usually good teams are nearing the end of a losing streak when they play well and lose. Edmonton played a solid game against the Wild, but still lost. They bring another solid effort tonight and get rewarded with a 3-1 win.
OBVIOUS GAME DAY PREDICTION: Draisaitl, who is pointless in the past two games, picks up a point. He has gone three games without a point once in the last four NHL seasons.
Advertisement
Ad
Advertisement
Ad
NOT-SO-OBVIOUS GAME DAY PREDICTION: Oilers PP is 6.2% in their last five games, while Boston’s PK is 91.2% over their last 13 games. Oilers PP gets back in rhythm with a goal and Barrie gets a point. His lowest point/game of his career is against Boston with only four points in 16 games. He picks up his fifth tonight.