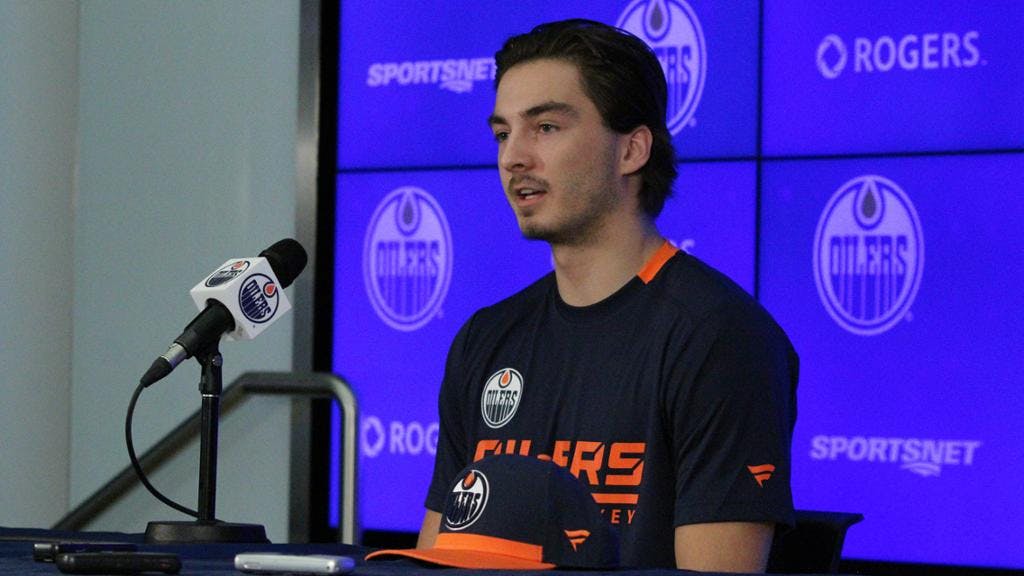 By Liam Horrobin
4 months ago
Comments
After another successful season with the Shawinigan Cataractes, Xavier Bourgault is set to turn pro. In his final season with Shawinigan, the Oilers first rounder helped guide them to their first QMJHL Championship and a semi-finals appearance at the Memorial Cup. After playing almost 200 junior games, Bourgault is ready to take the next step in his career. The big question surrounding him now is where will he play?
The goal would be for him to play on the Edmonton Oilers’ right side. With the lack of depth on the right wing, there is a spot available on the third line next to Ryan McLeod if he can earn it. Bourgault proved in junior that he can score points, putting up 75 in 43 games with Shawinigan last season. That scoring ability could help the Oilers massively, providing them with another threatening line that could chip in with some secondary scoring.
Advertisement
Ad
Advertisement
Ad
However, the factor of strength needs to play into the decision too. Bourgault’s estimated weight is 180 pounds, meaning he’s gained seven pounds since being taken 22nd overall. Starting in Bakersfield would help him grow physically and mature his game much easier than in the spotlight of the NHL. Additionally, the Condors are in a retooling phase so Bourgault would be joining them at the same time players like Carter Savoie, Tyler Tullio, and Ryan Fanti start their careers. Having them develop together could benefit the team down the road too.
Once training camp rolls around, the organization will have a clearer idea of where he’s at. Until then, we can only speculate what will happen. And with that, let’s look at what the Nation thinks should happen with Bourgault next season.
Advertisement
Ad
Advertisement
Ad

Bakersfield so he can be that super rare dude who gets called up in the playoffs, wins the conn Smythe and then ROY the year after!!

Kid showed a lot of promise last year during camp before he got cut and played really well in the Q. Let him play in the young guns tourney and see how he looks at camp. I’m guessing Bakersfield for 1 more year to learn and play against men.

Thought he played well enough to make the team at last years training camp. Probably gets a few games then Bakersfield. Dominate there and gets called up mid season.

Develop him in AHL. How many guys come up too quickly and fizzle out?

The ONLY CORRECT ANSWER IS BAKERSFIELD! All season long.

I’d love to see Bourgault crack a spot on this Oilers roster, he’s a scorer and has lots of upside. Besides that, I like how confident he is! 😊

More than likely; Bakersfield. He might get a few games to start the season with the big club for some experience

The verdict is that fans want to see Bourgault play in the American Hockey League for a season and develop with the Bakersfield Condors. There’s a history of Ken Holland not rushing his prospects to the NHL.
With Bourgault, there isn’t a wrong answer. If he plays in the AHL, he’ll likely play a key role with Bakersfield, preparing him for the NHL. If he thrives down there, there’s probably a good chance we see him in an Oilers uniform as a call-up during the 2023 season. If by some chance he cracks the Oilers opening night roster, it means that Bourgault has exceeded all expectations, and if that’s the case, then Edmonton has a great player on their hands.
Advertisement
Ad
Advertisement
Ad
With the situation today, I think the Oilers should allow Bourgault to start the season in the NHL. You’re burning a year of his entry-level deal whether he’s in Edmonton or Bakersfield, so why not give him a few games to start the season? I wrote about it in more detail earlier this week, which you can read by clicking here.
If you’ve got other additional thoughts on the future of Bourgault, I’d love to hear them. Hit me up on Twitter @LiamHorrobin and let me know what you think the Oilers should do?