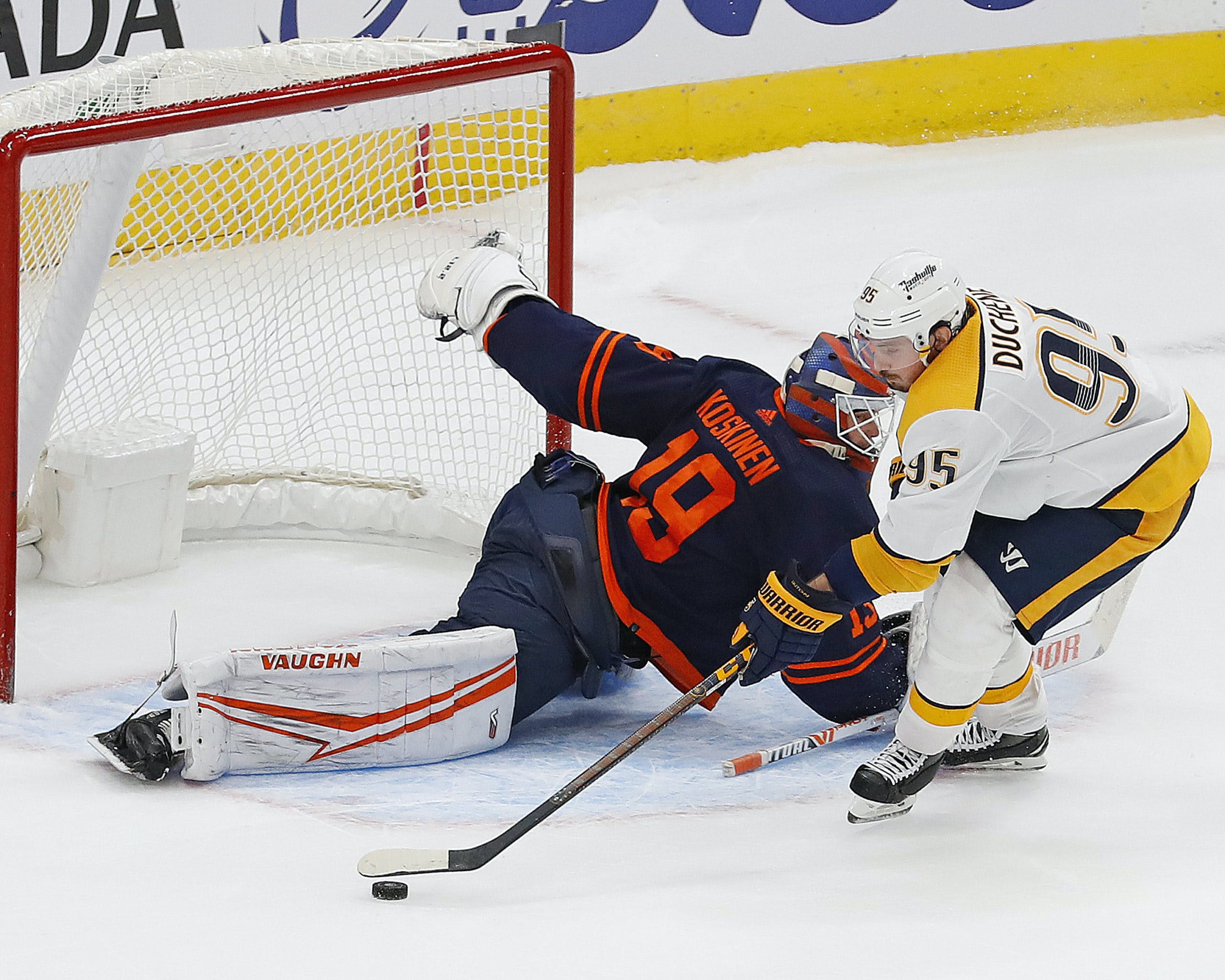 Photo credit: Perry Nelson-USA TODAY Sports
By Zach Laing
1 year ago
Comments
The best Edmonton Oiler was Mikko Koskinen. Oilers win 3-2 in the shootout.
Are the Oilers on a winning streak? Because for the third game in a row, the Oilers walk away with two points.
Last night it came against the Nashville Predators, a team the Oilers have had a surprising amount of success against in recent years. Last night? No different.
The Oilers played one of their tightest games of the year all the while firing 87 shot attempts and a staggering 46 shots on net.
Koskinen did everything he needed to by keeping the Oilers in a game that was tight on the scoresheet. He got beat by one through a screen and one clean one high glove side, but he stopped the ones he needed to.
Just what the doctor ordered.
“When your goaltender makes big saves, it’s contagious for your group,” said head coach Dave Tippett after the win. “Mikko’s a well-liked guy.
Advertisement
Ad
Advertisement
Ad
“Everyone knows the pressure he’s been under and they’re happy when things go well for him. Mikko wants that too, he wants to be part of the solution here.”

after being unable to decide it in overtime, the predators and oilers played in a skills competition. and a connor mcdavid goal wins it! here's the full shootout. pic.twitter.com/7hSmuzNMJn

Those Koskinen saves came at key points in the game, one’s that allowed the Oilers to stay in the action. His biggest, however, came in the shootout when he shut the door on Filip Forsberg, Matt Duchene and Roman Josi to secure the win.
“It’s huge for us. He’s a guy we care about a lot in that room,” said Oilers captain Connor McDavid after the game. “He’s been under fire like a lot of our team, but a lot of it seems to be pointed at him.
“We’re a team in there and we got to work together and work our way out of it. He’s been a huge part of that. We need timely saves and he’s been part of it.”
Advertisement
Ad
Advertisement
Ad
For the Oilers, it was a breath of fresh air. A night of redemption, and maybe a night to start building back some mojo.
“I don’t think we’re in full mojo phase yet, but we’re moving that direction,” smirked Tippett after the win. “When you put that many shots on net, you’d like to capitalize a little more.
“We’re making other teams’ goaltenders look good, that’s for sure.”
The Oilers now prepare to head on a little road trip. The next three games will take them through Montreal, Ottawa, and then Washington. They’ll have a fresh face in the crowd, too, with the team signing Evander Kane Thursday evening.
Following the Oilers win, both McDavid and Darnell Nurse spoke on his addition. You can read more about that here.

Nashville Predators fall to Edmonton Oilers in shootout, ending win streak at three
Filip Forsberg waited a little more than five minutes to score his team-best 22nd goal of the season Thursday night, marking the 200th such occasion of his career.
The score, the Predators first of a 3-2 shootout loss against the Edmonton Oilers, leaving the forward 10 shy of tying David Legwand’s franchise record.
The loss ended the Predators’ win streak at three, while the Oilers’ won their third straight.
Connor McDavid tied the score, though, with 28.7 seconds left in the first. His shootout goal was the difference.
Matt Duchene put the Predators ahead 2-1 when he scored his 21st of the season goal with 11:26 left in the second period. Evan Bouchard tied it again, though, after the puck appeared to bounce off two Predators’ sticks with 5:12 left in the period. – Paul Skrbina,
Nashville Tennessean