Advertisement
Ad
What Will McDavid Produce in 2021? 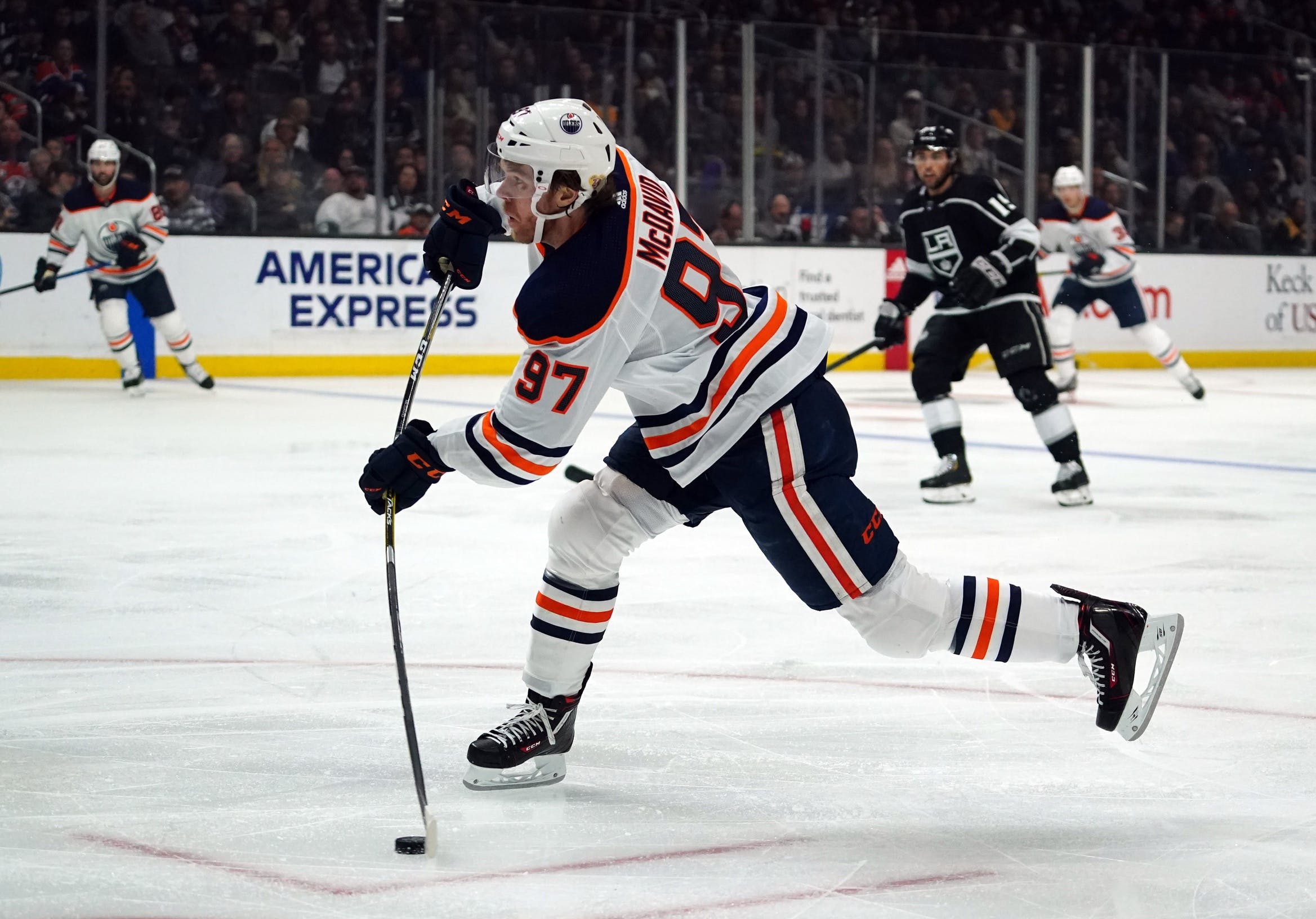 July 28, 2020; Edmonton, Alberta, CANADA; Connor McDavid #97 of the Edmonton Oilers celebrates with teammates on the bench after scoring a goal during the first period of an exhibition game against the Calgary Flames prior to the 2020 NHL Stanley Cup Playoffs at Rogers Place on July 28, 2020 in Edmonton, Alberta. Mandatory Credit: Andy Devlin/NHLI via USA TODAY Sports
Regardless of era, many of the NHL elite scorers over the past 40 seasons have been incredibly productive from seasons six and beyond. I mentioned Gretzky and Crosby’s production in seasons six-to-eight, but even beyond that they were still elite.
Advertisement
Ad
Advertisement
Ad
In the past five seasons, Crosby and Ovechkin’s 12th-16th in the league, they were both still top-ten in total points and Crosby had the fourth-best P/G at 1.15.
McDavid’s greatness will span another decade, and possibly longer, with much more education on training, rest and nutrition. We have seen it with Lebron James, Tom Brady and other truly elite athletes who are able to maintain their greatness longer. Are they better than the great players in the 70s, 80s and 90s or do they simply have better education on how to maintain their high level of play longer? I believe it is the latter.
Rest days, proper nutrition, stretching, physio and many other sports science alternatives allow today’s best players to extend the “peak career” years.
As a fan of sport, I love it. Who doesn’t enjoy seeing James, Brady, Crosby and others near the top of the respective leagues for 15+ seasons? And the good news for NHL fans is that McDavid will get better over the next decade.
Advertisement
Ad
Advertisement
Ad
But what can we expect from McDavid this season?
The NHL has had two previous 48-game seasons (I expect the 2021 season to be around 48 games) in 1995 and 2013. There is a precedent to use as a comparison, however; neither of those seasons included a global pandemic with no fans in the stands and only games against teams within your division. It isn’t a perfect comparison, but they are the best we have.
In 1995 the NHL had two superstars in Jaromir Jagr and Eric Lindros lead the league with 70 points respectively. Lindros had 29-41-70 in 46 games with a 1.52 P/G, while Jagr tallied 32-38-70 in 48 games for a 1.46 P/G. Jagr was in his fifth NHL season, while Lindros was in his third season. Both posted their highest P/G totals to date during that shortened season.
Advertisement
Ad
Advertisement
Ad
In 2013, Martin St. Louis led the NHL with 60 points in 48 games, while linemate Steven Stamkos had 57 points and Crosby and Ovechkin had 56. Crosby only played 36 games and his 1.56 P/G was much better than second-place St.Louis’ of 1.25 P/G.
Crosby produced at a 1.52 P/G clip despite playing only 63 games in the previous two seasons due to post-concussion symptoms. McDavid will enter this season 100% healthy, and well rested having only played four games since March 12th.
I expect his P/G to increase this season like it has the previous five and I see McDavid producing at a 1.75 clip. Which equates to 84 points over a 48-game season.
What projection to do you foresee?

Our ninth annual Month of Giving begins today. Every weekday from today through to Wednesday, December 23rd, we will be auctioning off a package on my TSN 1260 radio show with all the proceeds going to various charities including The Christmas Bureau, Santas Anonymous, Operation Friendship Senior Society, The Mayfield Rotary Club, Holiday Hamper Program and more.
Advertisement
Ad
Advertisement
Ad
We will have a new package every day, and you can see all the packages for this week at Jasongregor.com so you can plan ahead and make sure you don’t miss out on a package. We will update the site on Friday to showcase the following week’s packages.
Day #1:  A one-year membership at Blackhawk Golf Club courtesy of Al Prokop.