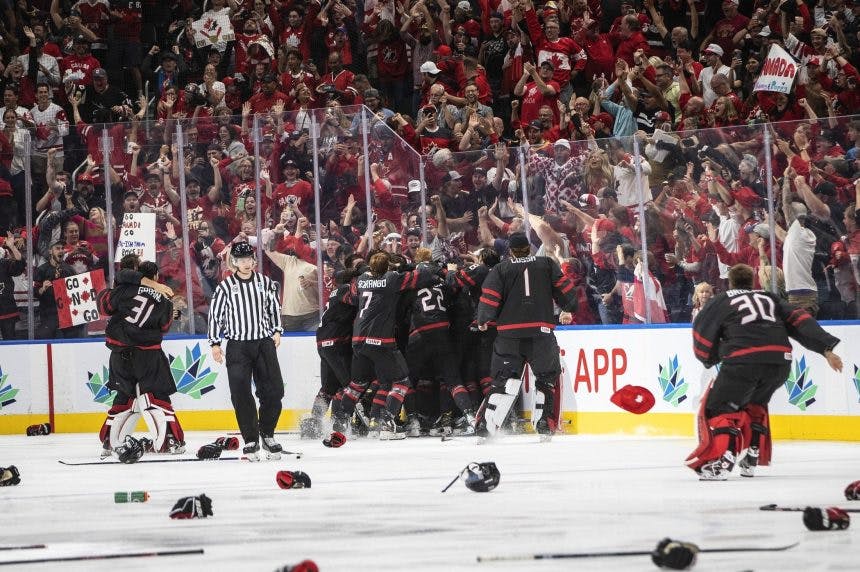 By Liam Horrobin
3 months ago
Comments
Well, they’ve done it again.
Team Canada has won its 19th gold medal at the men’s World Juniors after beating Finland in dramatic fashion 3-2 Saturday night. The win gives Canada their first gold medal on home soil since 2015, when they defeated Russia 5-4 at the Air Canada Centre in Toronto. However, tonight’s victory didn’t come with ease for Canada.
Heading into the third period, Canada held what looked to be a comfortable 2-0 lead. The Canadians had a lead going into the final period of each game in the tournament.
Joshua Roy opened the scoring shortly after the midway point of the first period. The Montreal Canadiens prospect started the initial pressure with a hard forecheck on the Finnish defender. Then, Mason McTavish brought the puck back in front and fired a shot on goal, with the rebound coming to Roy, who made no mistake in giving Canada the lead.
Advertisement
Ad
Advertisement
Ad
The next goal didn’t come until early in the second period from William Dufour. Dufour ripped a shot quickly by Juha Jatkola, doubling the lead.
Canada had plenty of opportunities to increase their lead, but their typically reliable powerplay was dry. Up until the final, they had a 57% conversation rate; however, they couldn’t find the back of the net once in seven attempts.
The third period was when Finland showed the world what it had to offer. They split the lead in half less than five minutes into the final third from Aleksi Heimosalmi, whose shot made its way through the crowd and by Dylan Garand. An excellent cross-ice feed from Topi Niemela to Joakim Kendall not long after got Finland right back on level terms.
That score stayed the same as the third-period buzzer sounded, which meant we were heading to 3-on-3 overtime. Of course, that came with a ton of drama.
Advertisement
Ad
Advertisement
Ad
Both teams exchanged chances, with Finland coming centimetres away from taking home gold for the first time since 2019. It wasn’t Garand that made the impressive stop for Canada; it was Mason McTavish. McTavish managed to swat the puck out of the air twice and keep the game going. Believe me when I say it will go down as an all-time World Juniors moment, especially with what happened quickly after.
Logan Stankoven found himself on a 2-on-1 breakaway after the puck was knocked away from the Finnish forward at centre ice. The Dallas Stars prospect had the puck poked out slightly but found Kent Johnson with the backend, who did the rest. Johnson’s shot was initially stopped by the pad of Jatkola, who made some great saves all night, but he stuck with it and beat him on the second attempt giving Canada gold.
Advertisement
Ad
Advertisement
Ad
It was an unusual World Junior in the middle of August, but Canada still found a way to make it all feel regular by winning gold.

what a release from william dufour, who makes it a 2-0 game. pic.twitter.com/uikrHi3cMg

canada is rattled. joakim kemell makes it a 2-2 game in the third. pic.twitter.com/r8HSme5agV

the golden goal! kent johnson wins it in overtime and canada is the 2022 world junior champions! pic.twitter.com/oKxCXCy1wA

here's the full 3-on-1 from finland that led to mason mctavish's goal line save and canada's win shortly thereafter. what a play. pic.twitter.com/bQ7gdXZlPz