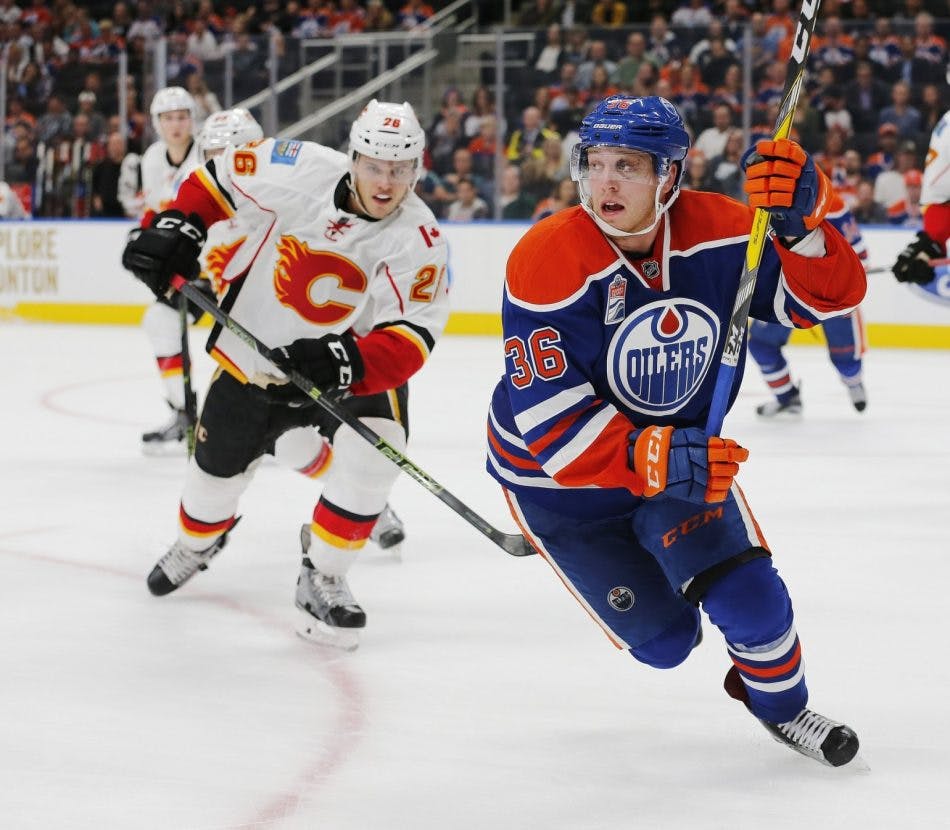 Photo credit: Perry Nelson-USA TODAY Sports
By Chris the intern
4 years ago
Comments
Welcome back to another weekly injury report! I am back from Mexico and made it through my vacation without any harm. Unfortunately, I can’t say the same for the Oilers, as they’ve got a new player to add on the injury list. Let’s get into it!

Drake Caggiula has been placed on the Injury Reserve to do an injured hand. How did he hurt his hand you ask? It didn’t happen when he was playing during a game, it didn’t happen when he was working in the garage at home, but it actually happened during practice. The boys were doing some kind of drill where they try to pick up the glove as fast as possible from the ice (as per Jason Gregor), and bada-bing-bada-boom, Caggiulas on the IR.
Here’s what Jason Gregor had to say about it:

Drake Caggiula will get an MRI on his hand today. There is a concern this could end up being more than short-term. He won’t play this weekend. He was one of the few depth guys scoring, so losing him is not ideal at this time. It makes it worse that he got injured in practice during a reaction-time drill with players seeing who could grab the glove on the ice the quickest. Seems like a pointless drill to me.

Obviously, we have to wait for the MRI results to get in before we can evaluate how long-term this injury will be, but it’s not looking good. In the meantime, the Oilers have recalled Cooper Marody and have activated Valentin Zykov. Drake Caggiula has struggled with injuries in the past, and of course, he’s hit with the injury bug right after he was picking up momentum with the team. It’s a shame he hurt himself in such odd circumstance, but I truly hope it’s not as bad as they think.
Advertisement
Ad
Advertisement
Ad

He has been skating, which isn't a surprise since it is a shoulder injury. He is progressing and still a week away at least. Not cleared for contact yet. https://t.co/oz4ekfqFHx

The Oilers are definitely missing Toby out there in the lineup. Before he got injured, he and Draisaitl were creating some really good chemistry on the second line, and I’m very intrigued to see how Hitchcock handles the lines when Rieder returns. As said by Gregor, it looks like Rieder is minimum a week away from returning. He’s been out for a few weeks now and I think it’s safe to say he’s on the home stretch of recovery.

"He took some incidental contact. He is out day-to-day, but nothing serious." Woodcroft on Yamamoto #Condors

It appears our boy Yamamoto got a little banged up in the AHL this past week. Thankfully Jay Woodcroft explained that it’s nothing to be concerned about. With a busy schedule this weekend, I’m guessing Yamamoto will miss both games but will return next week.

As Cooom and Jason Gregor pointed out in last weeks Injury Report while I was away, Andrej Sekera will be taking pre-game skates with the team over the next few weeks and will hopefully return back into the lineup in January if all goes well. If he does return in January it would blow my mind. When first injured back in the summer, he was first expected to return in late February or March. Some people mentioned that he might not play for the entire season.
Advertisement
Ad
Advertisement
Ad
It continues to amaze me how quickly professional athletes can bounce back from major injuries. How does an average joe get this kind of help when I roll my ankle walking down the stairs?

Sekera will have pregame skates for next two weeks then see doctor.If cleared he will then enter regular practices in non contact jersey. If no set backs seems like January is likely return time. #Oilers

The Nation Dan here to let you know that Ostap Safin is also dealing with an injury.