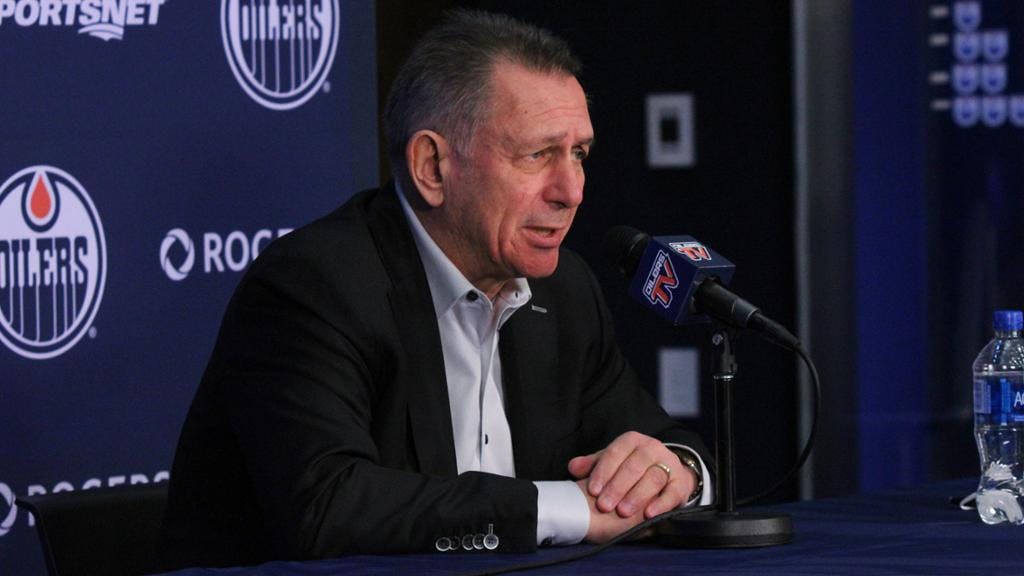 Photo credit: Edmonton Oilers
By Tyler Yaremchuk
1 year ago
Comments
Things are getting done. We are days away from training camps opening up and teams are clearly starting to get more aggressive when it comes to negotiating with their RFAs. The last thing they want is for these negotiations to become distractions and storylines as their clubs start gearing up for the season.
Last week, the Oilers signed Kailer Yamamoto to a one-year deal and crossed the final item off their offseason checklist. Then yesterday, we got big news out of Minnesota as Wild GM Bill Guerin got Kirill Kaprizov locked up to a five-year deal that carries a cap hit of $9 million.
That’s some big money for a player who has only played one season in the NHL, but if you spent any time watching the Wild last season then you’ll see why this is absolutely worth it. Kaprizov is the most electric player that their organization has ever seen and while yes, he doesn’t have a lot of NHL experience, I think it’s safe to say that his nearly point-per-game campaign last season was not a fluke.
Advertisement
Ad
Advertisement
Ad
Darren Dreger and Ray Ferraro speculated on their podcast this week that Kaprizov had turned down an eight-year offer at the same dollar value back in the spring. That means he turned down $72 million in guaranteed money, which is absolutely insane. At the same time, you could certainly argue that it may have been the right move. Kaprizov still got $45 million from the Wild and if he keeps playing the way he did last season, he’ll be in line for a massive payday when he hits unrestricted free agency.
Speaking of the “Ray and Dregs” podcast, the two were talking about the ongoing Quinn Hughes and Elias Pettersson negotiations and Dreger said “There is a high level of concern” that the two might not be signed by the start of the regular season. For a team that’s likely a borderline playoff team with those two in the lineup, not having them ready to go for any stretch of time in the regular season could be incredibly costly.
Advertisement
Ad
Advertisement
Ad

Agent Pat Brisson : We are working on deals for Pettersson and Hughes, we talk every other day, we talked last week and over the weekend. The goal is to get this done. #Canucks

The other big unsigned RFA is Brady Tkachuk. Elliotte Friedman was on the NHL Network and said this week is a big week for the two sides. He added that they were talking about a long-term deal but if an eight-year deal can’t be agreed to soon, then they would talk about something a little shorter.
It sounds like both sides are open to talking about different kinds of contracts. Combining that with the fact that the Senators currently aren’t at the salary cap floor, they’re $3.2 million shy of the mark, I believe we will see Tkachuk signed rather shortly.
Advertisement
Ad
Advertisement
Ad

THE OILERS & THEIR GOALTENDING

We got some news surrounding the Oilers and their situation between the pipes as Ken Holland confirmed that Alex Stalock is unlikely to play this season due to his heart condition. That means the Oilers could have an open spot on their depth chart if the NHL allows teams to carry three veteran goalies for COVID reasons, which could be a possibility.
In the AHL, the setup seems clear. Stuart Skinner and Ilya Konovalov will split time. The only way this doesn’t happen is if Skinner stays up with the big club as their third goalie, but I’m not sure how likely that is.
Elliotte Friedman wrote in his first ‘32 Thoughts’ blog of the season that “I don’t think Edmonton is done in goal. That storyline sticks around for a while. Mike Smith will be there, but what happens around him?”
Advertisement
Ad
Advertisement
Ad
That certainly makes it sound like they’re still looking to move on from Mikko Koskinen. Now, Holland did throw some cold water on that idea during his season-opening press conference.

"As we speak today, no I'm not looking to do anything. Things might change, but right now no." -Holland on finding another goalie

Things could change and I would expect that if Koskinen gets off to any sort of a slow start, that the Oilers will be aggressive in trying to make a move. I have a funny feeling that I will be talking about a lot of goalie rumours this season.

Hertl may be the most interesting trade target in the league heading into the 2021-22 season. The 27-year-old is in the final year of a deal that carries a cap hit of $5.625 million and he’s been a consistent source of offence for the Sharks over the last three seasons, averaging 0.87 points per game. He can play centre or the wing and considering the fact that his cap hit isn’t that high, there will be no shortage of contenders looking at him as we head into the season.
Advertisement
Ad
Advertisement
Ad
Kevin Kurz of The Athletic recently speculated that the asking price for Hertl could be a first-round pick and at least one high potential prospect. That sounds about right considering the fact that Hertl is a quality player but is scheduled to become an unrestricted free agent next summer.
Elliotte Friedman has reported that the Sharks still view Hertl as a part of their long-term plans and are trying to convince him to sign an extension.
I can’t imagine the Sharks being in the playoff hunt this season so it will be fascinating to see if they decide to hold onto Hertl until later in the season, get him signed, or if they get a good enough offer to move on him earlier in the year. It’s important to note that Hertl has a three-team no-trade clause as well.
Advertisement
Ad
Advertisement
Ad
Hertl won’t be the only pending UFA that will hear his name tossed around in trade rumours, but that’s a conversation for a later date.

For the best selection, deals and service around, look no further than Sherwood Ford. They are well-known for their “Giant Advantage,” and have been located in Sherwood Park since 2011. Their customers are important to and they firmly believe that the car shopping process should be fun and easy. That’s why Sherwood Ford is dedicated to making it quick and easy to find the car you want and the financing you need. Whether you prefer to shop online or in-store, Sherwood Ford will tailor the shopping process to you and their no-hassle pricing policy makes things easy. Visit SherwoodFord.ca to get started today.