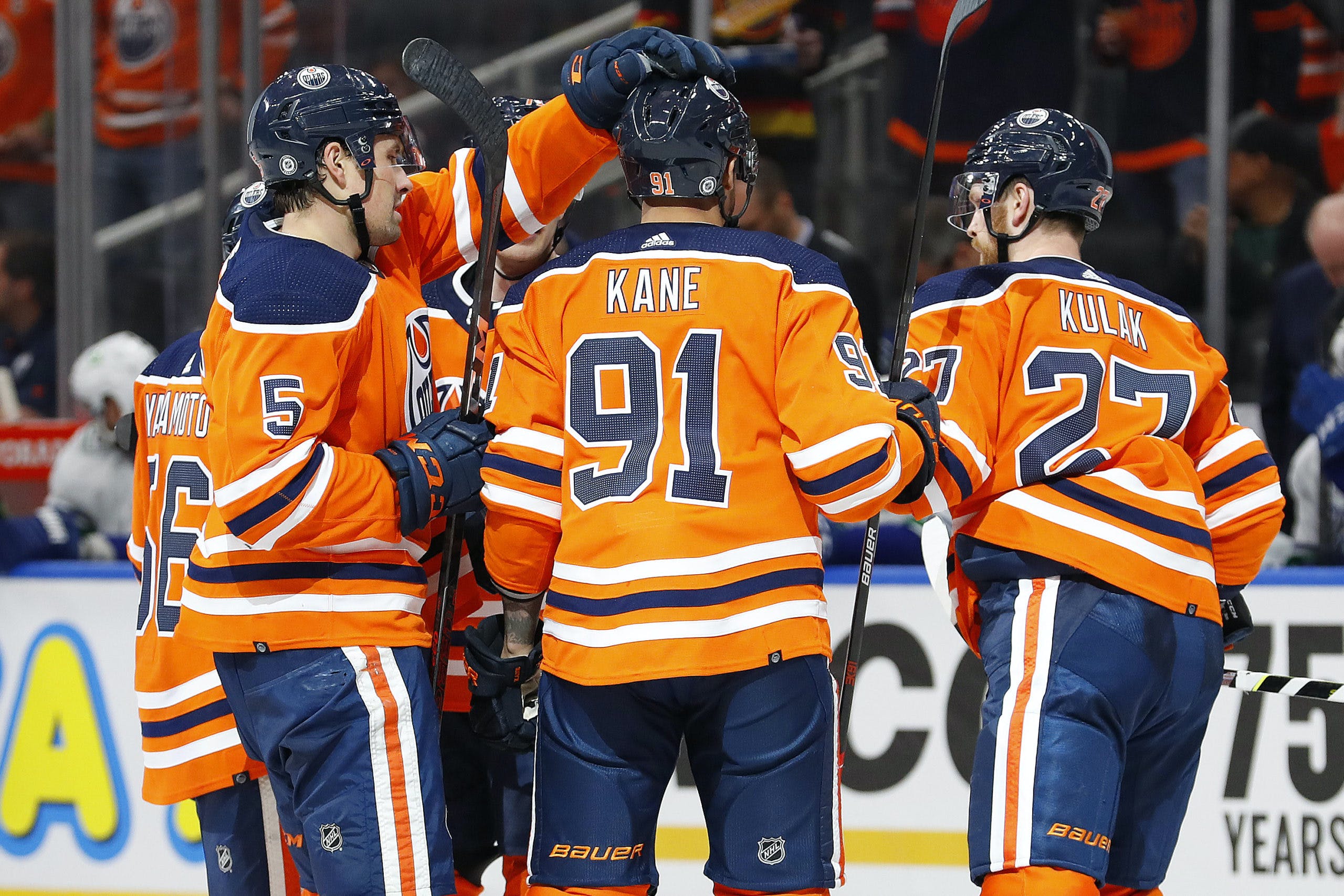 Photo credit: Perry Nelson-USA TODAY Sports
By Zach Laing
9 months ago
Comments
Onto the playoffs! Final score: 3-2 SO.
Everyone stayed healthy, and the playoffs are three sleeps away.

a kulak cannon makes it a 1-1 game! pic.twitter.com/FTQGHryLPn

tyson barrie with a big shot of his own to make it 2-2. pic.twitter.com/9DdDFZpLS7

the edmonton oilers win it 3-2 in the shootout!

On the Oilers setting a franchise record of 15 straight games without a regulation loss on home ice, riding momentum: “It’s big. I think the way we’ve been playing the last little while, 2.5 months, it’s all building towards what we’re going to be stepping into on Monday. I think we’re in a good position, we’re a confident group and we know what’s expected of us and what our systems are. We’re ready and excited to execute it.”
On winning different ways: “It’s huge. Good teams find a way to win. I think that rings really true and the last couple have been a bit different in the way they don’t have any bearing on the standings. I don’t think we’ve been as tight as we could be, but going into this game one we’re going to have to be locked down defensively and play as well as we played all year to get it done.”
Advertisement
Ad
Advertisement
Ad
On nerves vs. Excitement, how he’s feeling before playoffs: “I’ve been there a bunch of times, but I’ve never been this excited to get into the post-season. Just the season we’ve had with all the diversity we’ve faced, I think the way we’ve come out of it and the position we’ve put ourselves in, we’re a group that’s prepared and as excited as anybody to get this going. I think we got a real shot at it this year, and I can’t wait for Monday.”
On the Oilers not going in as cup favourites: “I don’t think we’re an underdog by any means, anytime you have Connor and Leon, people are going to pay attention to you. I like the spot we’re in. I like how we’ve played it out and finished the year. We’ve put ourselves in a position to have home ice and I wouldn’t want to play us if I were another team either. It’s a fun position to be in and we’re just excited to get it going.”
Advertisement
Ad
Advertisement
Ad
On 26-9-3 under Woodcroft, the process: “I think it was pretty gradual. He came in and he didn’t try to introduce too much right away. He kind of would work on one thing, then as soon as he thought we had a grasp on that, he’d introduce something else. Even up until this week we’re still working on different things we haven’t before. He’s trying to add to our game and build blocks. I think we’ve done a good job grasping what he’s trying to lay down. and I think we’ve put ourselves in a spot now of how we like to play and we’re right on schedule.”

On nerves vs. Excitement, how he’s feeling before playoffs: “I think it’s awesome. That’s why we battled so hard the 82 games and now we’re in. We have a chance to make it real what we’ve been dreaming about our whole life. It’s a fantastic opportunity for us.”
Advertisement
Ad
Advertisement
Ad
On this year’s team heading into playoffs vs. Last year’s team: “From a year ago I can’t really remember. But how we play right now, the system where everybody believes and everybody buys in. I think that makes the difference. I like our team and… We’re ready to go.”
On playing in back-to-backs: “I think it’s better to play the back-to-backs. You get the rhythm going, you don’t have to worry about anything. Just go in and play. I think it’s fun.”

On the game: “We didn’t start the game the way we wanted to start. We were on our heels for a little bit. I thought players played towards an identity of how we wanted to play and we stuck with it. I think that’s a good sign we found a way to win. You’re mentioning some of the guys who weren’t in the lineup, but how about some of the guys that were in the lineup? I thought Nugent-Hopkins played very hard, had great leadership for us. I thought Kulak was excellent on the backend. We got goals from a couple dmen, we had contributions from every single line. The way Mikko played tonight, you can’t say enough about him. I thought it was a good team win for us.”
Advertisement
Ad
Advertisement
Ad
On the players being engaged: “I think it’s a good sign the team has a way we want to look on the ice. We have an identity we want to play towards and to see them dig in and find a way to win — it’s the last regular game of the season but it leaves us as we head into our preparations for playoffs in a good mood.”
On the Oilers not going in as cup favourites, how he feels about the team: “My message to the team is come Sunday afternoon after the makeup game is finished, the league is narrowed. The league has gotten better. For us to continue to play towards an identity and trying to improve each day, I think that’s the key to a mindset heading into a playoff series. In terms of whether teams want to play our team or not, that’s up for the media to talk about or other teams. For us, our focus is on us and our concentration here as we begin our preparations for Los Angeles.”
Advertisement
Ad
Advertisement
Ad
On if he has the Oilers where he hoped at this point: “I think there’s a lot of really good signs. I like the fact we’re just getting right into things without a huge week of practices, or build-up towards the start of a series. I think it allows us to stay in the rhythm that we’ve been in. It’s been a sprint here. Just for me, personally, coming up in the middle of february, it feels like the schedule has been relentless but we have found comfort in the rhythm of that schedule and to long answer for you: I do like where our team is at.”
On if a coach coaches differently in playoffs vs. regular season: “No, I think you have to have a deep understanding of who your opponent is. You’re not just moving from one team to the next city and everything like that. Your level of preparation is important heading into the series. Your ability to adjust to what you see is important. I plan on bringing the same level of intensity to my job and I know our coaching staff is going to have that attitude in terms of how we prepare.”
Advertisement
Ad
Advertisement
Ad
On the messaging to the players after the game: “The messaging we just wanted to take care of a few nuts and bolts and housecleaning type issues so the players could go into their day off tomorrow with a clear head and really use tomorrow as a day to regenerate. The message is just what I said earlier: the league has narrowed, the league has gotten better and we need to take a step and it starts with making sure we rest properly and it starts with a good day of practice on Sunday.”
On playing in front of fans in the playoffs: “We think we have the best fans, the most passionate fans, the most knowledgeable fans in the national hockey league. I can tell you having experienced a playoff run in this city firsthand. I know how excited everybody is for the playoffs and I know how excited our players are to try and play to our full potential against a quality opponent Monday night.”
Advertisement
Ad
Advertisement
Ad

Do you think you know who will take home hockey’s ultimate prize? Do you think you can put together the ultimate playoff bracket? Sign up for a FREE ACCOUNT for the Daily Faceoff Playoff Bracket Challenge presented by PointsBet Canada to secure your spot for a chance at prices and glory! Sign up here.
Zach Laing is the Nation Network’s news director and senior columnist. He can be followed on Twitter at @zjlaing, or reached by email at [email protected]