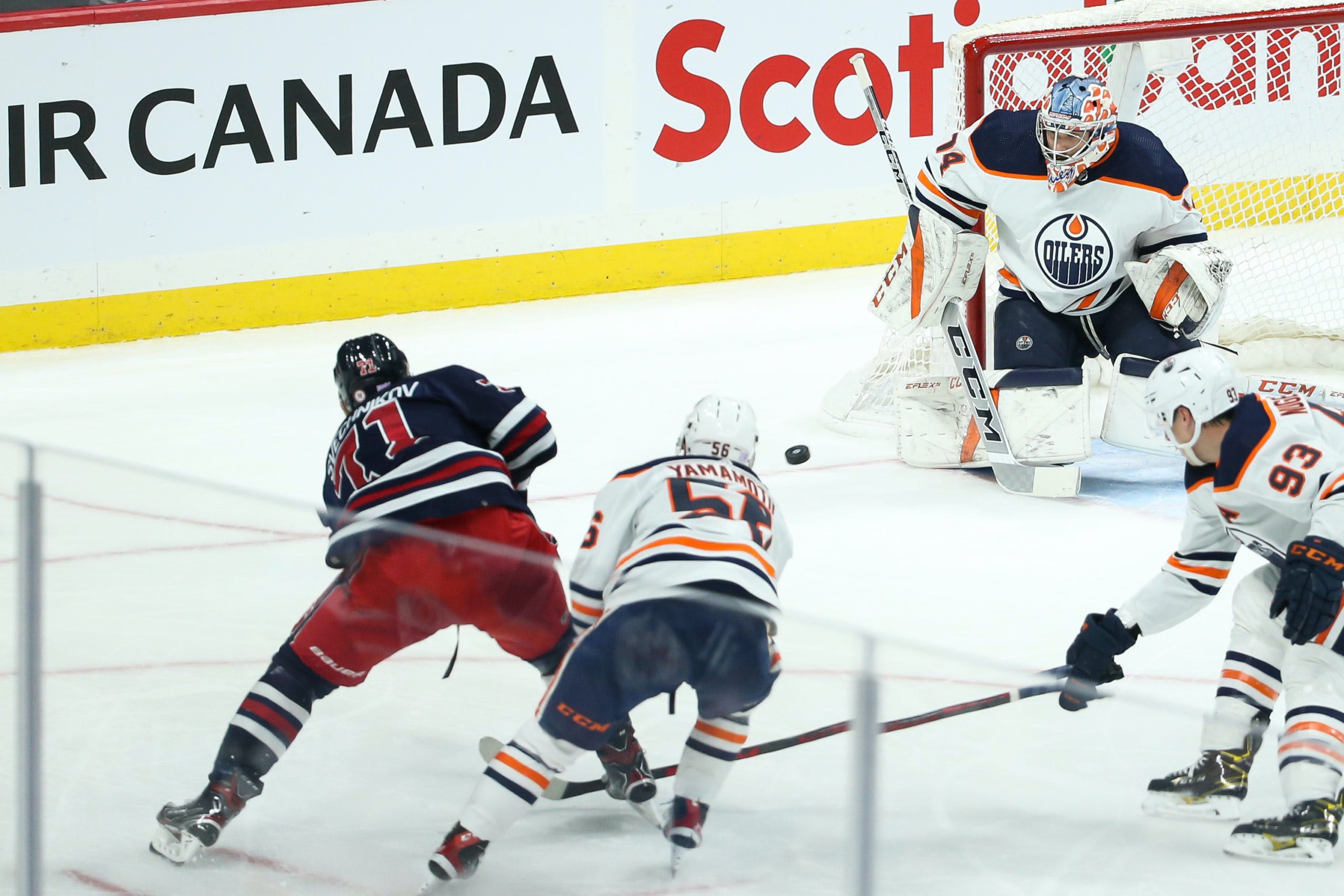 Photo credit: Terrence Lee-USA TODAY Sports
By Zach Laing
1 year ago
Comments
Well, at least the road trip is over. Final score: Winnipeg 5 – Edmonton 2.
It took Western Conference teams 10 games to finally beat the Edmonton Oilers with the Jets doing so tonight. The Oilers struggled out of the gate allowing the first goal against in what feels like the millionth time this year and once again, Edmonton was forced to chase the game all night long. It’s a terrible spot to be in on such a regular basis and undoubtedly, something the coaching staff has to be frustrated with too. Getting down early 2:09 into the game like Edmonton did against the Jets is a brutal way to kick things off. It throws your roll off and doesn’t allow you to get into the flow of the game the way you want.
Advertisement
Ad
Advertisement
Ad
Despite Mikko Koskinen coughing up that stinker after a brutal Duncan Keith giveaway, I actually thought Edmonton had played an okay first period. They seemed to be in the game and kept pace on the shot clock, but the truth of the matter is that Edmonton didn’t get much quality. They were outchanced 4-10 and allowed seven high danger shot attempts to the Jets’ one. Looks can be deceiving and boy was that the case. Edmonton came out with tons of jump in the second. They had a few good looks early in the frame, but the pesky Jets were right there. By the end of the second, there wasn’t much good left with the Oilers facing a 4-0 deficit.
The Oilers made it interesting early in thanks to some impressive work by the powerplay. Winnipeg took two penalties and Leon Draisaitl capitalized on both. But again, too little too late. Edmonton poured it on with multiple solid looks in the final frame, but the Winnipeg Jets held strong.
Advertisement
Ad
Advertisement
Ad
For the Oilers, it wraps up a five-game road trip that seems them go 2-3 with wins against Boston and St. Louis, but falling to Detroit, Buffalo and Winnipeg. Edmonton didn’t do a ton to make it easy on themselves and in all honestly, could’ve walked away winless on this roadtrip.
Edmonton heads home for a brief two-game home stand against Winnipeg Thursday and Chicago on Saturday.

oh hey look the oilers game is on aaaaaand a duncan keith turn over leads to a winnipeg goal pic.twitter.com/m4ES6LC2Zi

the refs miss a pretty easy interference call on scheifele, and then andrew copp is able to feed nik ehlers to make it a 2-0 game. pic.twitter.com/9Os9reKkpO

cody ceci and duncan keith are unable to get possession of a puck behind the oilers net then, along with ryan mcleod, leave pierre-luc dubois uncovered in front of the net. 3-0 jets. pic.twitter.com/zE9w5wMnt1

you could feel this one coming for a bit. mark scheifele tips home a logan stanley point shot and it's 4-0 winnipeg. pic.twitter.com/0fOhFLs6rO

a pair of powerplay goals from leon draisaitl has the oilers right back in this game cutting the lead to 4-2! pic.twitter.com/gP40dq4ben