Advertisement
Ad
The Day After -7.0: Three things from the Edmonton Oilers’ penultimate preseason game against the Vancouver Canucks 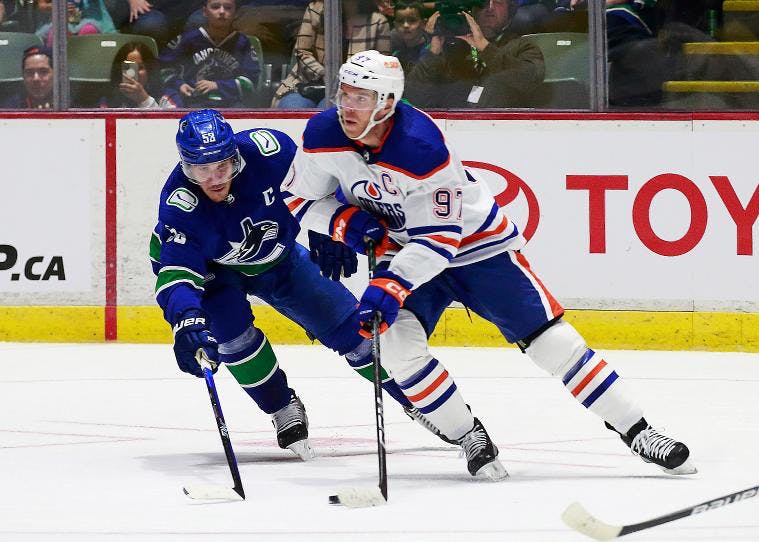 Photo credit: Jeff Vinnick/Edmontonoilers.com
By Zach Laing
3 months ago
Comments
The penultimate preseason game is done, and the regular season is in sight.
The Oilers fell 5-4 in what was a back-and-forth game the whole way through. Playing in Abbotsford, neither team held a two-goal lead at any point in time.
There are a few things to talk about, so let’s look at three things from last night’s game.

Hey, have you ever heard of this McDavid kid? Sure, he may have played in only three preseason games so far, but he’s got two points including a beautiful goal last night.
He absolutely blew by Canucks top-pairing defenceman Quinn Hughes and scored a beauty of a goal.
I know it’s preseason and we have to be careful about getting too excited about players, but I think there’s a really good shot this McDavid kid could make the Oilers roster. Top-six minutes with time on the powerplay could very well be in his future.
Advertisement
Ad
Advertisement
Ad

Things get physical… and sloppy

Last weekend, Darnell Nurse erroneously fought someone named Mitch McLain — a career AHL’er — twice in the same game. Last night, Nurse tried to lay a big hit on Nils Hoglander and swung his elbow around catching the latter hard in the face. You can see the clip below.
Nurse is clearly playing on the edge here this preseason. He’s been looking for big hits and clearly hasn’t shied from dropping the mitts. Fighting a career AHL’er isn’t smart. Swinging your elbow on a player isn’t smart and it wouldn’t shock me if the NHL Department of Player Safety makes him sit for a game or two because of it. Stuff like that is unacceptable.
He was also suspended last year in the playoffs for game six against the LA Kings after headbutting Phillip Danault. He forced the Oilers to go run 11 forwards and seven defencemen and while Connor McDavid and Evander Kane went nuclear with three-point performances, they got a little bit lucky.
Advertisement
Ad
Advertisement
Ad
Darnell wasn’t the only one taking liberties. Derek Ryan caught Quinn Hughes with a rough high-stick in the neutral zone early in the third period, and then seconds later Markus Niemelainen buried Elias Pettersson with a hit from behind. Ryan’s penalty was undisciplined, while Niemelainen’s hit was inexcusable. It was textbook boarding and right in the most concerning spot on the ice.
As a whole, the Oilers gave up a staggering eight powerplays. Monday against Vancouver they took five. Last Saturday against Winnipeg it was six. Against Calgary last Wednesday and Friday, they took three each game. In preseason game number two, the Oilers took six. In the preseason opener, it was four.
For those counting, the Oilers have now given up 35 powerplays to the opposition posting an 82.8 PK%. Edmonton gave up three powerplay goals last night and that was a major determining factor in the final score. Simply put, the Oilers need to seriously find a level of discipline heading into Friday and the regular season next week.
Advertisement
Ad
Advertisement
Ad

We’re almost there, folks. This season has seemingly taken forever to get through and Friday night will mark the last preseason game this year for the Oilers.
Thank god.
The Oilers have some tough decisions ahead of them leading into Monday. With Tyler Benson destined for the LTIR, it doesn’t sound like it will afford the Oilers any extra cap space.
So here are the questions that still need to be answered, and what may happen, based on who’s still with the team:

out in abbotsford, nils hoglander breaks open the scoring with this goal. the canucks take a 1-0 lead over the oilers. pic.twitter.com/bdXHGaRojE

zach hyman gets a partial breakaway and the puck takes a funky bounce into the canucks net. 2-1 oilers. pic.twitter.com/QeOIOSntVI

darnell nurse lays a big hit on nils hoglander and the latter is shaken up. nurse gets called for a double minor for high sticking. pic.twitter.com/TqURe6iHdA

a conor garland shot squeaks through stuart skinner allowing the former to bury his own rebound. 3-2 vancouver. pic.twitter.com/fYE15O3gEl

dylan holloway turns the puck over at the offensive blueline, bo horvat gets a breakaway, but stuart skinner stays strong. pic.twitter.com/kevW2oL1zW

then it's elias pettersson scoring with this laser on the powerplay. 4-3 canucks. pic.twitter.com/3hTNNa7ENF

elias pettersson scores again on the powerplay with another great shot. that's five goals in the third period and the canucks take a 5-4 lead. pic.twitter.com/MTulV94HZ2

scary sequence here. quinn hughes gets high-sticked in the neutral zone, then markus niemelainen lays a vicious hit from behind on elias petersson. both canucks were okay and returned on the following shift. pic.twitter.com/ZvtcOXV6po