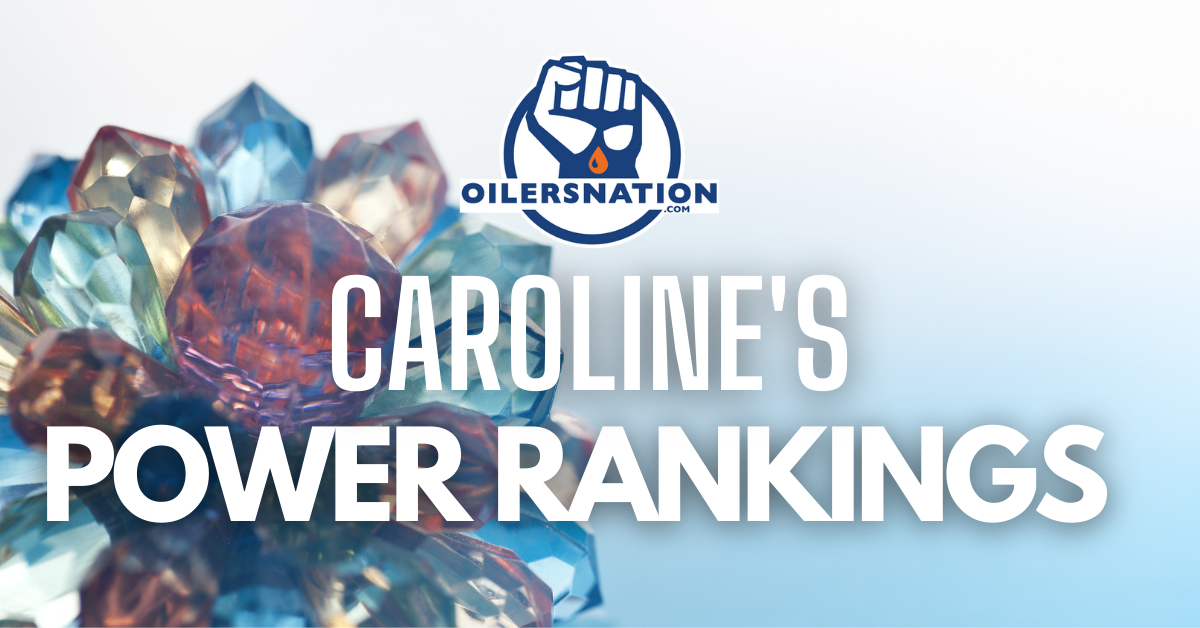 By Caroline Szwed
11 months ago
Comments
What’s going on Oilersnation? It wasn’t the best week for the Oilers and that’s putting it nicely. The Oilers are 16-7-0 at the end of Week 8, which is not a bad record by any means, but after a 9-1-0 start, the Oilers are 7-6 in their last 13. Just better than .500 hockey. They’ve yet to figure out how to eliminate the slow starts they’re having. Thoughts on what the Oilers need to do to achieve this? You know the drill! Talk to me in the comments.
For now, here are my top 5 moments from Week 8:

Okay, we all know about the lucky crystals, right? Remember last week on our pregame show when Jay touched the crystals and predicted that Nugent-Hopkins and Hyman would score against Vegas…and they did?
Advertisement
Ad
Advertisement
Ad
In case you missed it, here’s the proof:
Well, it happened again before the Oilers played the LA Kings. This time, Tyler predicted Darnell Nurse scoring while hovering his hands over the crystals.
Coincidence? There’s no such thing!

I don’t know what kind of magical powers these crystals hold but I’m not complaining! Should we get some Nation crystals swag in the new year? Talk to me in the comments!
4- I Am Bison King
Will the real Bison King, please stand up? Jesse Puljujarvi has filed a trademark application on “Bison King,” which in my opinion is absolutely amazing.

The filing was made after @Jpuljujarvi went viral for posting a picture of himself way too close to a real live bison.#BisonKing#Oilers #EdmontonOilers #Edmonton pic.twitter.com/Q54TSIE3OY

Advertisement
Ad
Advertisement
Ad
I’d love to give the team here at Oilersnation a massive shoutout for creating such genius content that NHLers themselves want in on. I’m telling you people, this is what I was talking about in last week’s power rankings. The content this team thinks of and creates is beyond clever!
I love that Puljujarvi is embracing his calling as The Bison King. I’m looking forward to seeing everything he does with his brand!

Two things: Darnell Nurse is back from injury AND he scored his first goal of the season on Sunday night against the LA Kings!
It’s no secret that the Oilers defense is struggling due to injuries but it was a breath of fresh air to hear that Nurse is back in the lineup. He is our No. 1 defenseman who logs a ton of minutes on the backend. He’s also a leader on this team and brings a much needed physical element to their game. The Oilers are a much better team with Nurse in the lineup, and we’re glad he’s healthy and ready to go!
Advertisement
Ad
Advertisement
Ad

At the end of Week 8, the blueliner has 1 goal and 11 assists on the season. Here’s to hoping that Nurse stays healthy and keeps producing points.

It’s another week in the NHL and another week where Connor McDavid appears on our power rankings. Are we surprised?! I am most definitely not.
At the beginning of Week 8 in McDavid fashion, he put up four points against the Pittsburgh Penguins (one goal, three assists) and did not disappoint in the Crosby vs. McDavid matchup.

Connor McDavid is at a slightly higher career trajectory in terms of stats than Sidney Crosby pic.twitter.com/7lsOSNIRtU

Connor McDavid and Leon Draisaitl each have at least 40 points through the Oilers' first 21 games.

They're the 2nd duo in the last 30 seasons with 40+ points in their team's first 21 games…joining Mario Lemieux and Jaromir Jagr (1995-96 Penguins). pic.twitter.com/qqXjT8cJcC

Connor McDavid scores his 210th career NHL goal to pass Paul Coffey for seventh on the franchise's all-time goals list to give the #Oilers a 5-2 lead late in the third period!

With the goal, McDavid also tallies his second four-point game of the season! #LetsGoOilers pic.twitter.com/wanB544KII

Also, say what you want about Crosby but the guy is always such a class act. Just in case you missed it, here’s what he had to say about McDavid after the game:

But before we move on, let’s talk about McDavid being issued a major and a game misconduct for boarding LA Kings’ Adrian Kempe. During the five-minute power play, the Kings scored three goals and finished off the Oilers. Yikes!
Advertisement
Ad
Advertisement
Ad

connor mcdavid has been assessed a five-minute boarding major and a game misconduct for this hit on adrian kempe. pic.twitter.com/UGcCF2IQhK

Do you agree with the call or do you think it was a little harsh? I’m so curious to hear what you think!

I mean come on, the hockey gods couldn’t have delivered Zach Hyman’s first NHL career hat trick against the Pittsburgh Penguins?! Unfortunately, Hyman was robbed of his third goal on the night but there was no shortage of love for the No. 18.

If I were the refs I would simply allow Zach Hyman’s hat trick to stand because Zach Hyman is a good guy.

Thank you @ZachHyman for everything man, what a breath of hard working fresh air you’ve been 🙏 #LetsGoOilers

Hyman ended the night with two goals and one assist in Week 8. He has 18 points on the season so far and I think it’s safe to say, he has quickly become a fan favourite on this Oilers team.
We know Toronto fans may still be salty that Hyman is no longer in the blue and white but Edmontonians have welcomed him with open arms…and also constantly remind Leafs fans that management was crazy to let him go.

ZACH HYMAN IS A KING AND WE THANK THE GODLESS LEAVES FOR LETTING HIM GO!